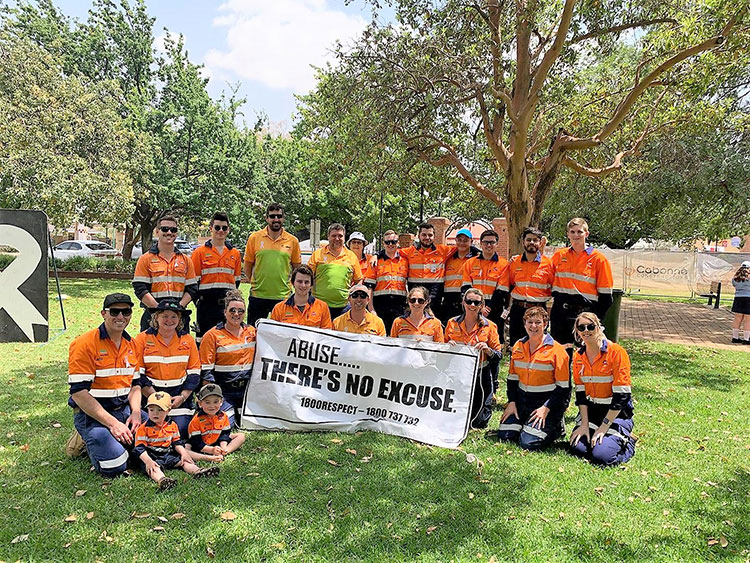 Northparkes Mines became the first mine in Australia to get White Ribbon accreditation. Employees of the mine have been supporting the annual march for the past three years.

The annual White Ribbon March took place in Parkes on Monday with about 150 people taking part to raise awareness of domestic violence.

As Parkes is currently ranked 30th in the state for incidents of domestic violence, the event was a good opportunity to create awareness.

“We believe in the capacity of the individual to change and to encourage change in others,” said Secretary of the Parkes Domestic and Family Violence Committee, Tina Nash.

Tina said the march was about coming together as a community and saying you would ‘stand up and speak out’ should you witness this type of behaviour. “We are happy with the event, but would like to emphasise that you do not have to be a victim or survivor of domestic violence to attend the event.”

Tina said the objectives of the White Ribbon campaign were to create widespread awareness of the positive role that men play in stopping violence against women; to enable leadership, particularly by men and boys, to bring about social change, and to build collective knowledge and understanding of the effective prevention of violence against women.

The news that White Ribbon Australia has recently gone into receivership does not affect the annual event as it would continue to be supported by the Parkes committee alongside the international White Ribbon movement.

In Australia, one in three women has experienced physical or sexual assault in her lifetime. The mission of White Ribbon is to change the attitudes and behaviours that support or excuse this violence against women in Australia.