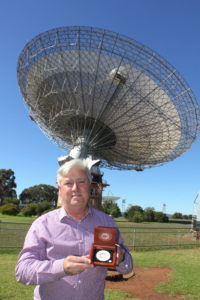 A passionate science teacher has given new meaning to the saying It takes a village to raise a child by turning his school into a natural history museum with the help of the community.

Gary Tilley’s work has been recognised nationally and internationally and last year he became the first public educator from NSW to win the prestigious Prime Minister’s Science Award for Teaching Excellence in Primary Schools.

“In over 30 years of teaching, I’ve never seen a primary school student who isn’t curious and doesn’t want to be engaged in science. Once they’re switched onto science, it helps their literacy and numeracy skills, and their investigative skills. Science is the key to the whole thing.” says Gary.

Gary was in Parkes last weekend to present at an annual CSIRO-supported teacher’s course run at the Parkes Radio Telescope for about 20 teachers from all over the country. He talked about what he had done at his school in primary science education.

“Communicating science, getting children inspired with science, engaging the community and scientists themselves with science to make it a better place for the kids—that’s my passion.” Gary says.

And it all started with one bare wall. As a specialist science teacher, Gary’s Principal, gave him the opportunity to intro- duce a new curriculum for science about ten years ago. He enlisted the help of an artistic colleague Tarni Williams to start a Science as Art project.

According to Gary all you need to do is enlist the help of the community. “Teachers do not realise the power they have as everyone wants to see kids in science.”

Every Monday after school students and parents helped to turn the school walls into artistic science displays. “We started off with a couple of canvasses of dinosaurs, and it has since grown exponentially.”

Today the school walls are covered with murals of space images, cretaceous marine reptiles, and dinosaurs, as well as scaled-up models of stars and planets that the children and their families have built.

According to Gary it was all done on a miniscule budget. “The secret is to build contacts, create networks and make use of your local community, whether it is artists, dancers, trades people or anyone who can make a contribution.”

More advice he offered science teachers was to make the subject more exciting and interesting is to look at what is happen- ing in the world. “Share science news with students, take part in the Australian bird count or do citizen science projects.” He said simple activities such as measuring the temperature in different spots at school over a period of time and representing the data in graphs, could already make such a difference in how students look at science.

One of Gary’s many missions is to mentor the next generation of science and maths teachers to improve the way these subjects are taught in the classroom. He hopes to return to Parkes later this year and meet with local teachers to share his passion and inspiration.

(Go to YouTube to see a video of the Seaforth Public School science walls.)