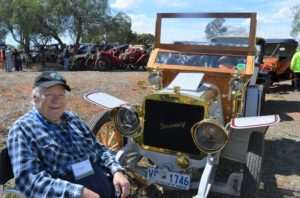 The Veteran Car Club of Australia’s National Rally combined with the museum event. The collection of rally cars included a 1912 Cadillac, the first car to ever have a starter motor and the youngest of the lot at 100 years old; a 1910 Brush with wooden axels and chassis, and the first vehicle to cross Australia from west to east driven by
Francis Birtles; and a 1903 Ford, the equal oldest of two cars still in existence.

“When I was 42 I lost my boat and plane licences on the same day after heart trouble, so I used the garage space to start my interest in vintage cars.” Francis has restored more than 80 cars.

Drivers and passengers in their historical finery were treated to morning tea and lunch, while Parkes Public School students and members of the public enjoyed the smoke and noise of engines and the history of the antique cars.