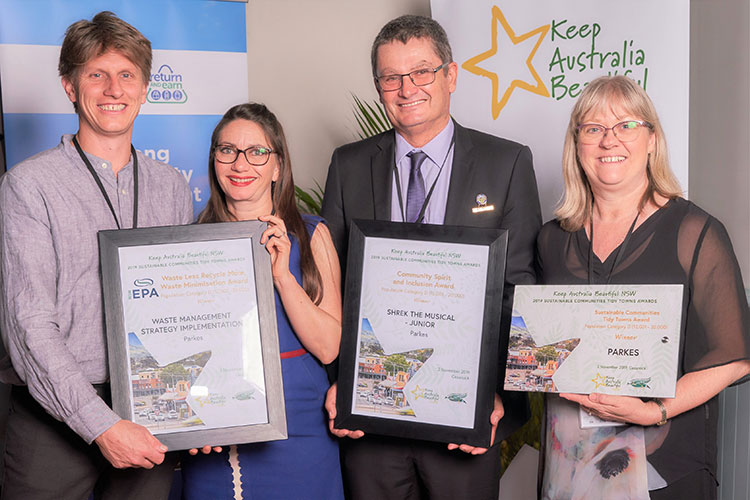 Parkes made a clean sweep at the Keep Australia Beautiful Awards in Cessnock last weekend coming home with six awards.

Parkes not only won the overall award for population 12,001-20,000, but also claimed awards for Waste Management, Response to Climate Change, Environmental Education, and Community Spirit and Inclusion.

However, it was the Parkes Musical and Dramatic Society who stole the show winning the Community Spirit and Inclusion Award for the musical Shrek – Junior. The production not only included a record number of junior members on stage, but also offered an autism friendly relaxed performance – a first for a regional theatre company and junior cast.

The show was attended by many who had not previously had the opportunity to see live theatre before, such as those living with autism, epilepsy, a sensory disorder, or a disability.

The Parkes Recycled Water Scheme was recognised with a Response to Drought Award. The Scheme represents Council’s long-term vision to secure Parkes’ water supply and increase our drought resilience in a changing climate.

Banjo the Frog received a Highly Commended Environmental Education Award for sharing the message on recycled water and water resource issues with our community.

Trundle School was recognised with a Highly Commended Community Spirit and Inclusion Award for their Country Kids Reaching Out project.