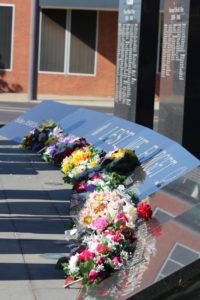 Parkes Shire residents are invited to attend the Anzac Day Commemorative Services to be held across the region on Tuesday, 25th April.

The Parkes Shire RSL sub-branches, in combination with Parkes Shire Council, have planned special services in each of the townships to pay tribute to veterans and current defence personnel.

Parkes Shire Mayor, Cr Ken Keith OAM said: “Historically, 25th April is a day for the Parkes Shire to come together to acknowledge our history, honour the Anzac legacy and show our strength as a community.

“The day will begin with Dawn Services in Parkes, Alectown, Tullamore, Peak Hill and Bogan Gate and will be followed by the Anzac Day march, wreath laying and commemorative services mid-morning.”

A number of guest speakers have been invited, including Captain Anthony Klen- this from the Royal Australian Navy. He will acknowledge the 75th anniversary of the 1942 World War II campaigns, the Battle of the Coral Sea, and share an insight into his time in the Navy at the 9am com- memorative service in Cooke Park.

Council’s roads and footpath crew have constructed a new footpath at Memorial Hill connecting with the existing granite walkway further down the hill to significantly improve pedestrian access.

The full Anzac Day program is available at www.parkes.nsw.gov.au or can be collected from Council’s Administrative Building on Monday.

Shire residents are also invited to commemorate the sacrifice and service of Anzac veterans by personalising a poppy to go on display at the Parkes Visitor Information Centre (VIC).

Free handmade paper poppies are available with space to write a message of commemoration on the back.

“The Flanders red poppies have long been part of Anzac Day observances and are considered an emblem of remembrance.”

During the First World War, red poppies were among the first plants to spring up in the devastated battlefields of northern France and Belgium.

In soldiers’ folklore, the vivid red poppy symbolises the sacrifice of shed blood, and has since become a symbol of remembrance.

The poppies have been on display at the VIC since Wednesday and will be there until Anzac Day.