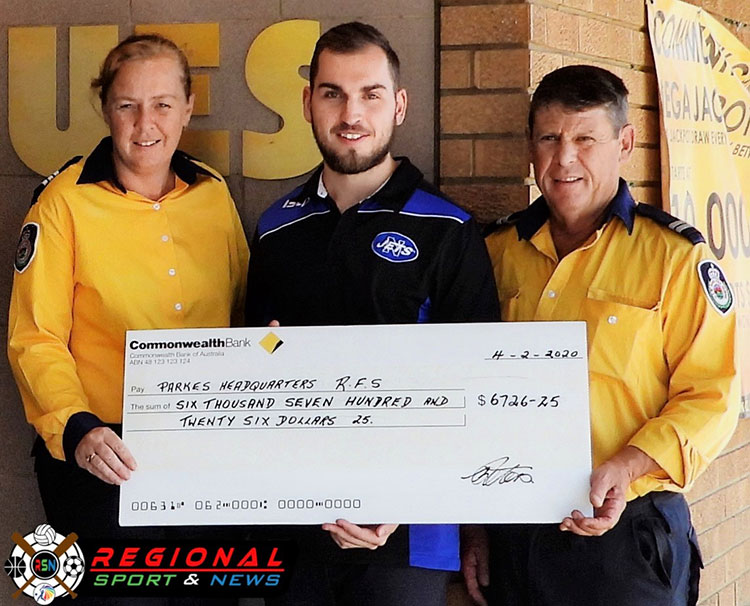 The Parkes Headquarters Rural Fire Service received donations of almost $7,000 this week from the community.

The Parkes Leagues Club raised a staggering $6,726.25 during the Parkes Elvis Festival. Club Manager Luke Malam said local patrons and from afar helped to fill buckets with their donations of coins and notes. Luke said the coins weighed so much it took a car ride to the bank to have them counted.

“Donating to the local Parkes Headquarters Brigade was at the top of our list, as it means the local firefighters can continue the great work they do, protecting not only our community but those around us,” said Luke.

The Leagues Club has always been committed to supporting the Parkes Community and donates in excess of $50,000 each year to local sporting groups, charities and community organisations.

The second donation came from Centrelink staff. They love a mufti day, especially during the Elvis Festival, and raised $142 for a cause they thought was very important. This brought the total amount donated to Parkes Headquarters this week to $6,868.25.

Parkes Headquarters Captain Vicki Williams and Senior Deputy Captain Steve Chester could not thank both organisations enough. “Donations from our community mean so much,” said Vicki. “These donations will be wisely spent on the brigade’s new fire station to create a place that members can enjoy between incident callouts, and to assist with the training of current and new members.”

Parkes Headquarters members also collected donations during the Elvis Festival over two nights in Cooke Park and raised over $3,000. This amount was donated to Jenolan Caves Brigade as they had lost their station during the fires whilst serving their community.