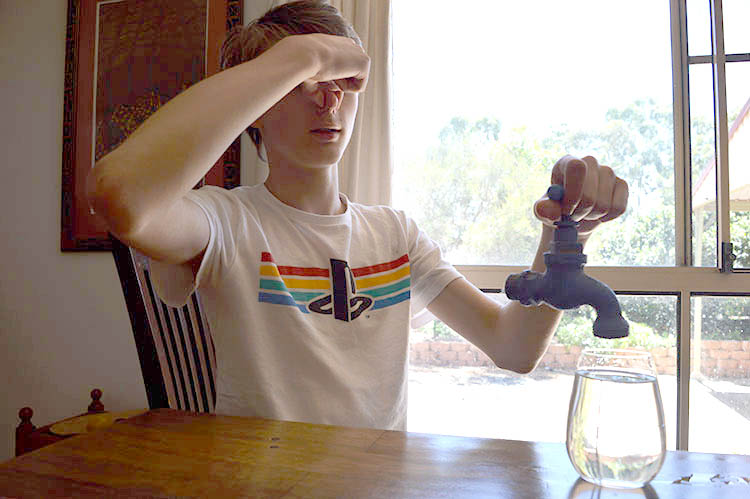 SMELLS TERRIBLE, TASTES LIKE DIRT… A community outcry over the smell and taste of tap water in Parkes over the weekend resulted in Council changing the mix of water.

Many residents experienced a shock on the weekend when they opened their taps. The subsequent community outcry has resulted in a change of the water mix to improve the aesthetic nature of the water.

The town’s drinking water had suddenly turned foul-smelling and tasting with many residents resorting to buying bottled water to drink.

“It is disgusting, and it took ages to get the taste out of my mouth. It was like dirt,” complained one resident on Council’s Facebook page, while many others called Council to enquire about the water.

The issue was discussed at the monthly Council meeting on Tuesday with Council’s Director of Infrastructure Andrew Francis giving the assurance that the situation had been improved by changing the mix of water. Andrew said according to the continual monitoring of drinking water production at the Parkes Water Treatment Plant, there was no exceedance on any of the real-time monitored indicators and all water samples taken in the reticulation passed bench-top testing.

“The aesthetic quality of the water, taste and odour, are not monitored as they are subjective, meaning that members of the community taste in different ways and at different concentrations, and cause no harm. We appreciate the community providing their feedback, as it helps us to identify the source and potential compounds for testing.

He attributed the temporary change in taste to a higher proportion of dam water from Lake Endeavour being used at the moment. “Naturally occurring chemicals in dam water due to catchment runoff and microbial activity can give the water an earthy taste.

Parkes Shire Mayor Cr Ken Keith OAM said: “Council was using a higher proportion of dam water as a result of the abundant supply in Lake Endeavour at the moment. The Parkes Water Treatment Plant draws water from three sources – the Lachlan River, the bore fields, and Lake Endeavour Dam.”

Councillor Bill Jayet asked at the Council meeting whether there were more chemicals in Parkes’s water compared to Sydney as visitors to his home often remarked how our water caused dry skin after a shower, and that it was hard to lather up.

Andrew responded that the basic treatment of water in Parkes was identical to Sydney, but that dam water is naturally softer than bore water and Sydney only used dam water. He also said Sydney might also be adding lime softening, which came at high capital cost.