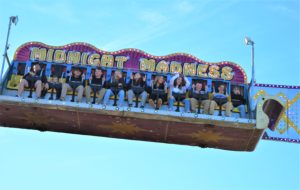 The spectacular fireworks display of the Parkes Show on Tuesday was symbolic of how our community can still shine despite the severe drought gripping the region. Speakers at the official opening of the 138th Parkes Show all agreed that without the support of the community, this annual highlight on the town’s calendar would not be possible.

“The community spirit and support for the Parkes Show remains strong,” said Forbes Showgirl Grace Allen, who placed third in the State-wide Sydney Royal Showgirl competition as she officially opened the show. Show President Peter Unger thanked the more than 200 people involved in staging the show, as well as all the exhibitors. “We would not have a show without all the entries.”