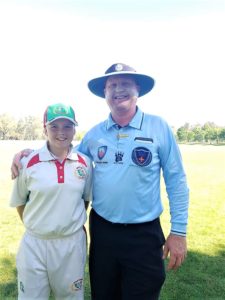 The Parkes U/14 cricket team Parkes scored a convincing 91 run victory over a keen Wellington team at a superbly prepared Spicer Oval on Sunday. The Parkes team included a good number of U/12 players who took the opportunity to extend their skills by playing with talented U/14 players.

Parkes batted first to see a very positive opening partnership between Joseph Tanswell and Jack Milne. They put on 51 runs in 11 overs before Jack was dismissed for 23 with 4 boundaries.

Hunter Hawke (38 runs off 44 balls with 4 very strong fours) then partnered with Joseph in a quick fire 63 run partnership for the second wicket. Joseph (75 runs from 89 balls with 7 well struck boundaries) should be very pleased with his highest score in his young career.

After a middle order collapse, late order players Flynn Thompson (13 n.o) and Harry Kennedy (6) added quick runs at the end of the innings.