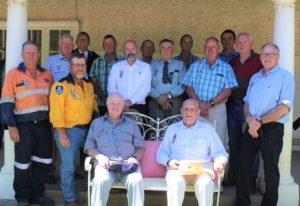 Almost half of the Coobang Rural Fire Brigade members received long service medals at a ceremony held on the farm Trelawney outside Parkes last week. The 29 long service medals represented a combined total of 954 years of service at one of the oldest and most active rural brigades of the Mid Lachlan Valley Team.

The longest serving member with 64 years is Alan Somers. He joined the brigade in 1953 and became captain in 1960, and president from 1967 to 1997. Assistant Commissioner Jason Heffernan commended Alan on his achievement saying he had joined an elite band of people.

It was a special day for the Somers family, as Alan’s son Gary received his long service medal for 39 years. Gary became president in 1998 and still holds the position. Two other members who received medals for over 50 years of service were Neil Unger with 54 and Leon Laidley with 55 years.

The Deputy Commissioner said the rural fire brigades played a vital role. “If we don’t get out and do it, no one else will.” He warned of the season ahead saying it was going to be a hot and dry summer posing a real challenge to get on top of the situation. Parkes Deputy Mayor Barbara Newton thanked all the members for their bravery and dedication.