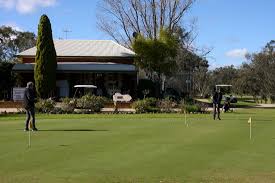 Veteran golfer Graham Cooke bounced back to his brilliant best when he took out Saturday’s 3rd round of the BWR Accountants and Advisors Summer competition. In very hot conditions Cooke, playing off a 31 handicap, set up the victory with a brilliant front 9 holes that saw him return a great 23 points or the equivalent of 5 shots under his handicap to record his first victory in nearly six months.

Runner-up was Lindsay Elliott who recorded 42 points, just one shot ahead of third place Frankie Cock. She continued her brilliant form in returning a great 5 under handicap score of 41 points.

The Nearest the Pin jackpot on the Idlerite Tyrepower 1st hole was not won, however Richard Hutchison claimed 20% of the jackpot and won 16 balls. The other Nearest the Pin awards saw Steve Simpson clean up on the Griffins
Leading Edge 4th hole. This shot allowed Simpson to claim the Money Hole award too. On the Dirt Doctor Landscaping 6th hole, Mitch McGlashan got the first of a double. His second award came on the difficult Westlime-sponsored 15th hole, while on the Harvey Norman 11th hole it was Lindsay Elliott who got to celebrate.