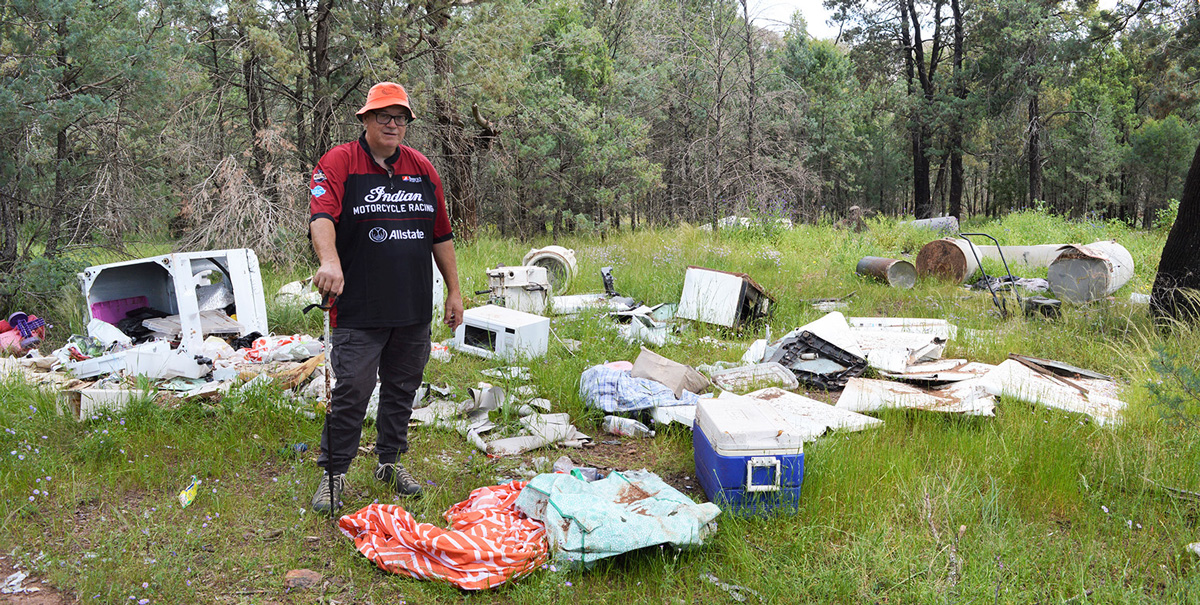 The illegal dumping problem in the forested area behind the Parkes Hospital was addressed at the Parkes Shire Council meeting last week. Eric Lensson was extremely pleased by the decision to fence off the area and to clean up rubbish sites like this one.

The beautiful forested area behind the Parkes Hospital will be cleaned and fenced off to protect it from illegal dumping following a resolution by the Parkes Shire Council last week.

Council recognised the ongoing environmental issues of illegal dumping, burning out of cars and weed infestation in the precinct. It was resolved to spend $25,000 to erect a fence of rural nature with two top lengths of barbed wire to restrict vehicle access, but include a number of pedestrian access points.

Councillor Ken McGrath also proposed that a clean-up of the area be undertaken and suggested to make it the focus of next year’s Clean Up Australia Day.

“I’m happy to coordinate it, and have already spoken to some contractors to volunteer their equipment to help with the clean-up effort.”

The Mayor said he had also received several complaints from people who enjoy walking there about the dumping problem.

Erik Lensson, whose property borders on the area, had written to council and Member for Orange Phil Donato about the issue. He was following the Council meeting online last week and was extremely pleased with the decision to go ahead with the fencing, as well as the additional motion by Cr Ken McGrath of clearing up the forest rubbish.

“There are not many such readily accessible forested areas around Parkes Shire and the town itself. The forest behind the hospital is a great exercise track for walking the dog, riding mountain bikes and enjoying wildlife like kangaroos and the odd blue tongue or bearded dragon,” he said.

“I would like to extend my appreciation to the council staff, the council, the Mayor Ken Keith and especially Cr McGrath and the Member for Orange, Phil Donato, MP.”

Council noted the positive contribution from surrounding landowners who carried out mowing and general maintenance in and around the site.