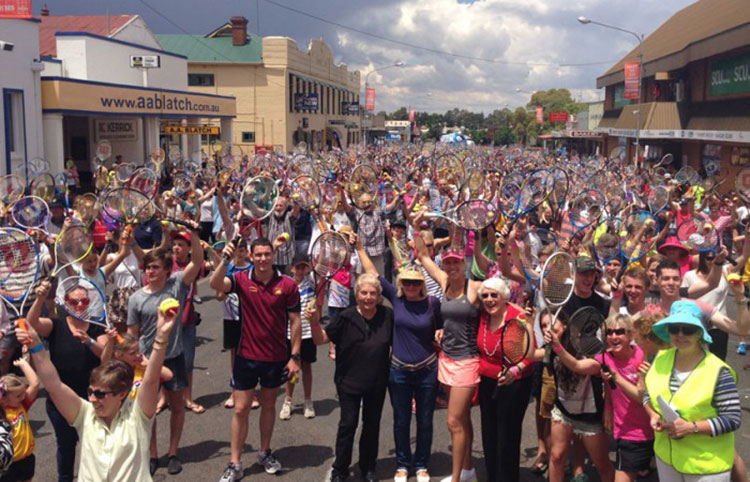 Parkes residents often create their own entertainment with lots of community support, like a few years ago when a new world record was set in the main street when 772 people bounced balls on tennis racquets. (Photo: Tennis Australia)

Country living is making a come back with more people moving to regional Australia from capital cities than the other way around.

A total of 65,000 more people chose to move to country towns according to a new Regional Australia Institute (RAI) report tracking population movements between 2011 and 2016.

Parkes has also seen many city dwellers become residents over recent years. For Marie Wyatt, who has lived in Singapore and Sydney, the move to Parkes has given her a totally new understanding of a sense of community. “It is huge out here. There is no sense of community in a city, while in Parkes people are always willing to help out, especially during hard times.”

Marie said when she first arrived it felt like she had landed on another planet. “People here have known each other for generations.” She has come to love how relaxed the lifestyle is and what a great place it is to raise a family.

Cerith Frame made the move with his family from Townsville less than a year ago. “We were extremely excited to start afresh in a new place.”

He is loving his new life being able to see his family every day doing a residential job. “Parkes is a lot smaller and people here are very friendly and welcoming. It’s easier to get to know people and recognise faces on the street.”

He said while there were less laid out activities on offer compared to cities, it was more enjoyable to find your own entertainment and go off exploring.

Deputy Prime Minister and Minister for Infrastructure, Transport and Regional Development Michael McCormack said: “If the COVID-19 pandemic has proven anything, it’s that you can work from regional Australia and do any job. The jobs that were once only attainable if you lived in a capital city can now be done from anywhere.”