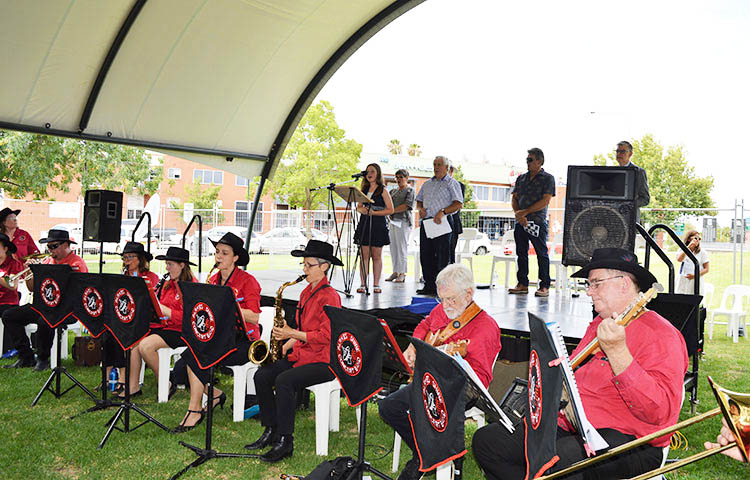 FOR WE ARE ONE AND FREE… Savannah Ross led the singing of the new version of the National Anthem accompanied by the Parkes Shire Concert Band at the Australia Day celebration in Cooke Park on Tuesday.

Australia Day celebrations were not only shrouded in COVID regulations this year, but the culturally sensitive day also saw protests in the cities as the controversy of the date has deepened in the country.

In Parkes the official ceremony went ahead in Cooke Park with the main focus the announcement of the Australia Day Awards. Numbers were limited under strict COVID rules, and the Australia Day Ambassador, who was from Sydney, had to cancel his visit. The scaled down celebrations also saw the singing of the national anthem that included the change to “For we are one and free”.

Referring to the current climate surrounding Australia Day, Parkes Shire Mayor Ken Keith OAM started off his speech saying he had been reading a lot of early Australian history over the past 12 months and the terrible treatment of the aboriginal community. “I can fully appreciate the desire to change the date,” he said.
The 26th of January is controversial as it marks the start of Australia’s colonisation when the First Fleet arrived in Sydney in 1788.

The Parkes Phoenix asked the co-chair and secretary of the Galari Lachlan Reconciliation Group, Eileen Newport about her thoughts on reconciliation and Australia Day. She said Reconciliation NSW asked that all Australians remember our Aboriginal and Torres Strait Islander peoples, the first peoples of our land when celebrating Australia Day. “It is a time to remember and celebrate their survival against great adversity.”

She continued saying Stan Grant said in a 2017 article: “It is a ‘damaging myth’ that Captain Cook discovered Australia.” He said that Australia was founded on three grand stories: the First Nations, the British tradition and the richness of our migration story, but that ‘Indigenous people become a postscript to Australian history’.

Eileen said we needed to go one step further and study the history of our land, the government policies and practices of our land and decide if they are fair and just for all people. “We need to look further than our own spaces to see how we can improve health, education and job prospects.

“The plaque near my front door reads: ‘As you take your next step remember the first people who walked this land’, but we need to do more than just “remember them”. We can be a positive voice for improvement and if that includes changing the date that Australia Day falls on then that at least should be an item for discussion.”