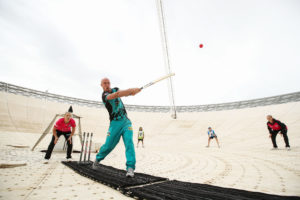 “I’ve played cricket in lots of places. In the backyard, the driveway, inside the house, but never on top of a radio telescope.” Brisbane Heat star, and one of the world’s biggest hitters, Chris Lynn joined other cricket heroes and local kids to recreate the famous scene from the movie, The Dish, at the Parkes Radio Telescope last Thursday.

Under dark, stormy clouds they tried to ‘blast’ a ball into space to launch Cricket Australia’s new kids program Woolworths Cricket Blast “I didn’t quite get the ball into orbit, but it was a great experience. It was amazing,” said right-handed top order batsman Chris.

About 60 children from Parkes, Orange, Dubbo, Condobolin, Forbes and Cowra signed up to be part of the exciting day and took part in many cricket activities on the grounds around the radio telescope.

In the famous scene in the movie two engineers turn the giant radio telescope, used for beaming live television pictures of the Apollo 11 landing on the moon to the world, into a makeshift cricket pitch.

Last Thursday the cricket heroes climbed the giant structure under guidance from CSIRO Operations Scientist John Sarkissian to re-enact the scene using soft balls not to damage the dish.

“The cricket scene in the film has become an iconic feature of the CSIRO Parkes Observatory, and to see it re-enacted by real cricketers was a blast,” said John. “It was fantastic to see how much the junior cricketers enjoyed themselves. I’m sure they will remember it for a very long time.”

Woolworths Cricket Blast is a program for girls and boys of all abilities between the ages of 5 to 10 to learn new skills and play Australia’s favourite sport.