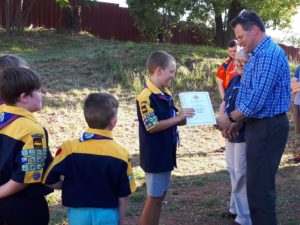 The 3rd Parkes Scout Group celebrated a big year of adventure and learning last Tuesday evening at their Christmas Party which was well attended by Scout and Cub families. Member for Orange, Mr Philip Donato joined the group for a pizza dinner and took the opportunity to congratulate the group on their achievements and encouraged them and their leaders, Barry Read and Raiechell Giles.

As part of the evening’s festivities, a Cub, Thomas Barker, was accepted into Scouts. This involved the Scouts building a temporary bridge structure from Stringybark and Thomas skilfully walking the bridge to be welcomed by Scouts.

This year Thomas achieved his Grey Wolfe Award, which is the highest achievement that a Cub can obtain. This is the second year in a row that a Cub from the 3rd Parkes Scouts has received this Award, with Charlie Zannes receiving his when he graduated to the Scout Troop in 2016.

Mr Donato congratulated Thomas and presented him with his Grey Wolfe Certificate and badge. He then distributed Subway encouragement certificates to the group. Mr Donato said “It is great to see such a keen group of Cubs and Scouts getting out and having a go, learning new skills and contributing back to their community”.