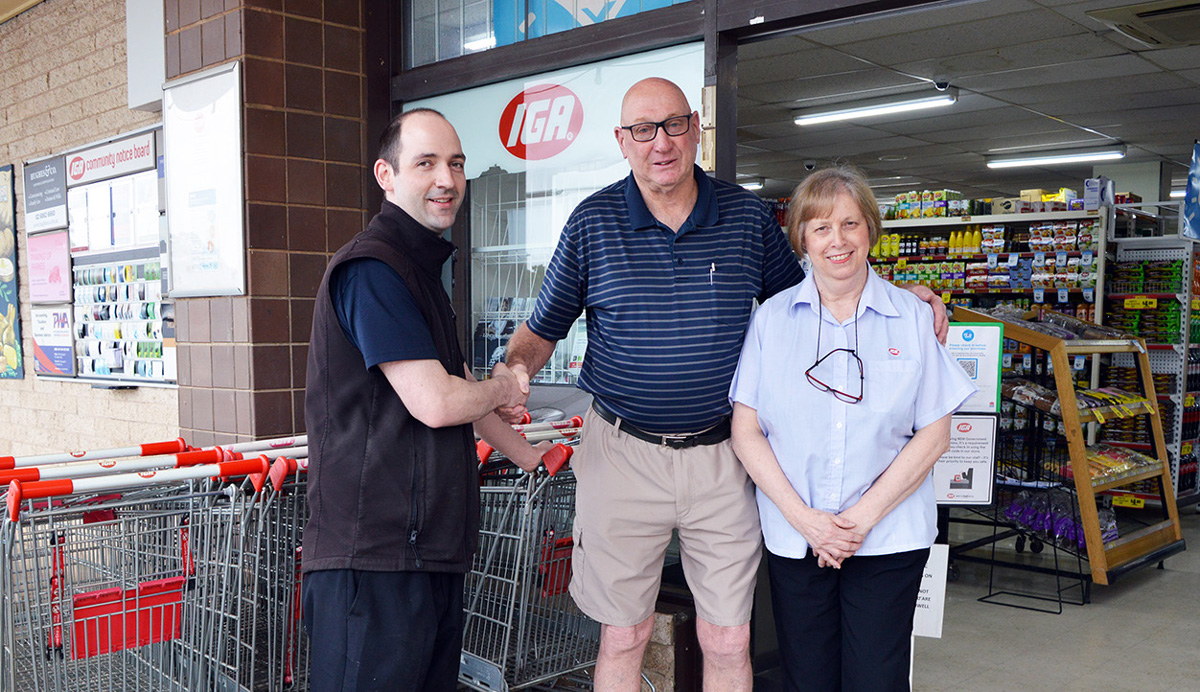 HANDING OVER… The new manager of Cunningham’s IGA Tyrel Knott (left) with Peter and Janine Boschman who owned the business for the past 43 years.

For the past 43 years they’ve ingrained themselves in the community, so it’s no wonder it is the interaction and banter with clients they are going to miss the most.

Peter and Janine Boschman made themselves redundant at Cunningham’s IGA last week as they handed over the reigns to the new manager. A Sydney-based group called Vic’s Fresh is the new owner and Tyrel Knott will be managing the shop.

Like guardian angels, they will be keeping watch from above for a while longer until they’ve made plans for new accommodation. They have lived upstairs from the store from the day they accepted the partnership from Janine’s parents Brian and Vivienne Cunningham in 1978.

“We have signed a 12-month lease to give us time to decide whether to buy or build a home in Parkes,” said Peter.

It will also give Janine time to process a life time of memories starting from her childhood when the lolly counter was her favourite place in the store her parents had started as a fruit and veg outlet 54 years ago.

Still a sweet tooth, she jokingly said not having easy access to chocolates was going to be the worst part of retirement!

The best memories for Janine would be all the people she had met over the years. “I always made a point to remember everyone’s names. I loved seeing a baby being born and next minute they were in Year 12.”

She also made special friendships with the casual girls who started when they were 15 years old and stayed for three years until they finished school.

Looking back the highlight for Peter was when they won two categories at the very first Henrys Business Awards. “It was not something we set out to do, but it was bestowed upon us.”

Running a business seven days a week was tough, but set them apart, “until the big boys decided to steal our thunder”! The coming of Franklins, Coles and then Aldi meant they had their ups and downs. “We came down and did what we had to do. Picking up ideas from other people kept us going.”

While their loyal customer base also ebbed and flowed through droughts and other bad times, Peter said people kept faith in them that they could deliver what they had to.

“At least we are able to go out on a high – COVID has helped us immensely. The demographic of our customers is more elderly and they felt safer in a smaller and quieter environment.”

For Peter and Janine the time has also come to slow down and enjoy the luxury of having more time on their hands. Peter has plans to become a regular on the golf course, while Janine looks forward to visiting the kids and grandkids in Canberra without having to rush back to run the business.