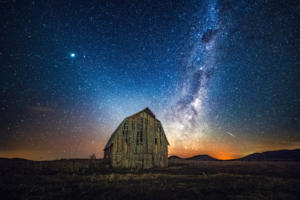 Because of our relatively remote location and low light pollution, the Central West boasts some of the darkest skies in the world – making it a fantastic place to appreciate the wonders of the night sky. A week after attracting writers and astronomers for the Skywriter’s big gig, Parkes will be host- ing another gathering of celestial lovers, this time astronomers and astrophotographers.

AstroFest is a two-day festival of astron- omy that brings world-renowned astronomers and astrophysicists to Parkes. It is organised by the Central West Astronomical Society and is now in its 13th year. Perhaps its biggest drawcard is the widely regarded astrophotography competition, dubbed the David Malin Awards. It has become a stand- out feature of the festival – and is considered to be the premier event of its kind in Australia.

Aspiring and accomplished astrophotographers from all over Australia enter the photography competition – not only for the prestige, but for a chance of winning prizes to the value of $10,000.

This year’s competition had eight categories, and were judged by world-renowned astrophotographer – and competition name- sake – Dr David Malin. It was not just techni- cal skill that is assessed – prizes are awarded to pictures that capture the beauty of the sky and the intrinsic interest of astronomy in an aesthetically pleasing manner.

“This year’s pictures maintained the high standards we have come to expect from the Australian community,” David said. “There are some splendid examples of modern astrophotography among the finalists.”

The finalists’ photos will be exhibited at the CSIRO Parkes Observatory’s Visitors Centre from July 16 for 12 months. A second touring exhibition, organised by the Museum of Applied Arts and Sciences, will travel to selected venues across Australia. Last year’s exhibition was viewed by 110,000 people.

The David Malin Awards will be presented during the AstroFest conference dinner tomorrow night.