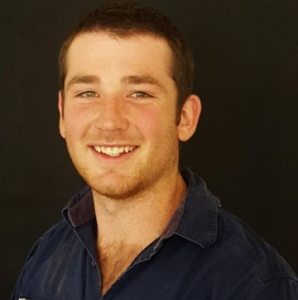 Former Parkes resident Douglas Keith has shown he’s a chip off the old block, carving out success early in his career. The son of Sue and Ken Keith is the recent recipient of two awards for his craftsmanship in fine furniture making.
Douglas moved from the family home in Parkes all the way to Tharwa, an historic village outside of Canberra, in order to pursue his passion for making fine timber furniture.

He was fortunate enough to secure a fouryear apprenticeship with well-respected furniture designer Myles Gostelow. Myles is a master-craftsman specialising in creating beautiful yet functional furniture from Australian hardwood. Myles has had work commissioned by the ACT government and various private clients. His pieces range from chapel furniture, to presentation boxes, to artfully crafted walking sticks.

Douglas is currently in the third year of his apprenticeship with Myles, and was recently named the 2016 NSW/ACT Apprentice of the Year by the Furnishing Industry Association of Australia (FIAA). Aside from the accolades, the Apprentice of the Year is also awarded a $500 cash prize. The apprentices had to provide an example of their recent work as part for the judging process. Douglas submitted a bedside cabinet he had handcrafted from Tasmanian
Blackwood and celery top pine. The cabinet had a smoothly curved door and drawer front, and was made with hand-cut dovetails and mortise and tenons. Recognising his talent, FIAA stated that Douglas demonstrated exceptional skills and that his knowledge of his trade and his commitment for woodwork is clearly evident throughout his project.

Not long after his first win Douglas scored another victory, and was named a recipient of the 2016 John Tiddy Memorial Award. The award was presented at the 2016 Australian Woodworking Industry Suppliers Association (AWISA) Exhibition, which was held in Melbourne in July. The prize included an all-expenses paid trip to the exhibition, plus $2,000 towards his training course fees.
By Raen Fraser