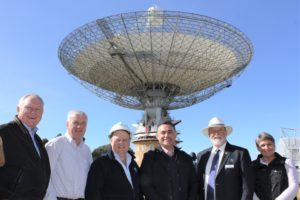 The stars were shining on Sunday, as members of the Central West Astronomical Society calibrated their telescopes for a day-time astronomy event. They were joined by some of the stars of the political firmament, with a special visit by the Deputy Premier, John Barilaro and the Parliamentary Secretary for Western NSW Rick Colless.

Their visit just happened to coincide with AstroFest, which provided a dazzling backdrop for Parkes part of the electorate-wide tour. Mayor Ken Keith, Deputy Mayor Barbara Newton joined locals in welcoming the state politicians at an informal lunch at the Dish Café. Not only did the ministers get to see the opening of the David Malin Astrophotography Awards, they were treated to a special tour of the dish by expert guide, CSIRO’s John Sarkissian.

It was the perfect opportunity to showcase the strengths of our town, and perfectly complemented the Deputy Premier’s tour, promoting the government’s Regional Growth Fund. “The government’s in a really good position financially,” John Barilaro said. “There’s a lot of money available in our Regional Growth fund, especially for councils to build local amenity – it might be sporting infrastructure, cultural infrastructure or playgrounds,” he said.

“Right now, we’ve actually got a real opportunity to make a difference in rural New South Wales and leave a legacy of opportunity,” John said. “I want to make sure our kids in regional NSW can grow up here, study here, and remain here.” “One of our core businesses should be about opportunities for young people,” he said.