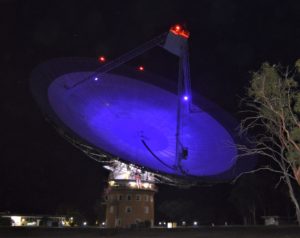 A group of approximately 300 people gathered at the CSIRO Parkes Radio Telescope last Friday night to enjoy Dinner Under the Blue Dish, an event organised by Currajong Autism & Special Needs Group. The event was inspired by the annual global initiative that bathes iconic landmarks and structures around the world in blue light to support and celebrate World Autism Awareness Month.

“The night far exceeded our expectations,” said Angela Wilson, co-founder of the group. “It was such a lovely evening, people were very relaxed and enjoyed spending time with their family.”

“There was such a fantastic atmosphere. We had live music playing, and the astronomical society set up their telescopes for people to have a look at the night sky,” said Angela. The Parkes Observatory Visitors Centre also stayed open for the evening.

“The number of people that turned up for dinner at the Dish Café took Craig a bit by surprise, although he had put on plenty of staff. People were lined up out the door for much of the night.” Some people chose to dine inside the café, while others spread out on the lawn on picnic rugs and chairs.

The raffle raised a total of $927.55 for the Currajong Autism & Special Needs Group, which will be put towards a free family fun day for families with children with special needs, in Term 4 this year.

“As the event went so well, we hope to do it again next year,” said Angela.