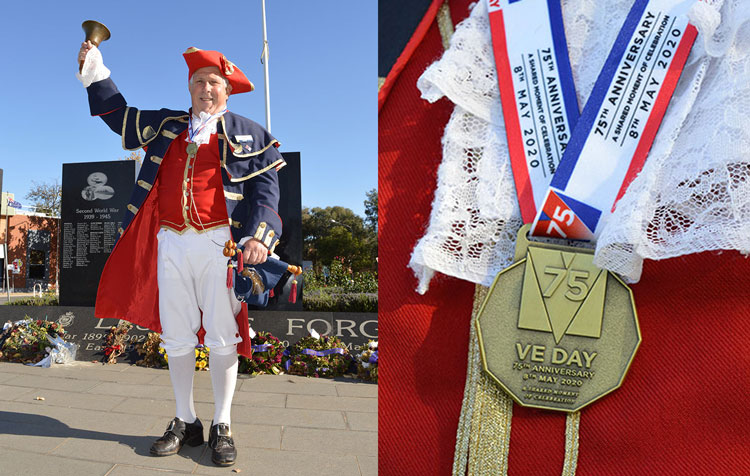 The Parkes Town Crier proudly joined town criers from all over the world on the 75th anniversary of Victory in Europe (VE) Day last Friday for a very special ceremony.

Tim Keith, Parkes’s town crier of the past 24 years, marked this historic anniversary with a ‘Cry For Peace Around The World’ at the Cenotaph in Cooke Park.

Although the cry was done in almost complete isolation in the park, Tim raised his bell with nine other Australian town criers at exactly 3pm, while the New Zealand and Great Britain town criers followed their time zones.

It has been 75 years since the guns fell silent when Winston Churchill officially announced the end of the war in Europe and declared it to be VE Day at 3pm on Tuesday, 8th May 1945.

Tim said the idea came from the Guild of Town Criers in England, and as the President of the Australian Guild, he felt it was a great event to join. Each participant received a special VE Day medallion and pin to mark the 75th anniversary.

Part of the ‘Cry For Peace Around The World’ read:
Remember men and women, old and young, who died to make us free.
The women left at home did not just sit and wait.
They toiled in harsh conditions before dawn to very late.
Factories, farms, other essential jobs, the women were quick at learning.
They worked, some died, to keep the home fires burning.
As we remember this special day, do not forget that every day someone needs your aid,
Do not put away your poppies, letting your memories fade.
Celebrate with the knowledge that VE Day is also a time to remember,
Beyond the solemn wreaths of the 11th of November.
Let’s thank all those who have gone before, with their colours proudly unfurled.
Join us as united we say, ‘Peace to the world’.