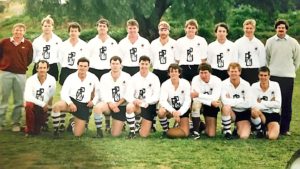 The Boars faced the City Lions in Orange last Saturday on a cold winters day and came home with a draw.

Parkes shot out of the blocks in the first two minutes when Lloyd Rogers placed a ball on flying winger Dyllan Phillips who bolted 50m scoring on the wing. A turn over scrum won by Parkes again saw Rogers take the ball. This time he turned inside the pack and crossed next to the posts. He converted his own and the Boars had a 12-0 lead into the break.

City came back with their big lock Joe Alexander pulling in a loose ball to cross for their first points. The conversion was missed leaving the score 12-5.

Lock Israel Symington worked his way to the wing and found the ball from a wide pass through outside centre Ben Powlay. Symington’s inside pass put fly half John Rathbone on the ball and he ducked, dived and crossed wide on the wing. The conversion scraped the posts but nothing added: 17-5.

City bustled from a scrum on the 15m mark and finally crossed out wide. Unable to add the extras, the score was 17-10.

The final 15 minutes of the match had both teams working hard. City found a gap after Parkes were down to 14 players and after repeated scrums fly half Keegan Harding crossed next to the posts. Adding the extras drew the score to 17 all.

City had a golden opportunity to put the match away with a penalty goal attempt right in front on the final whistle. The ball hit the centre post and bounced back into play to keep the score a draw.