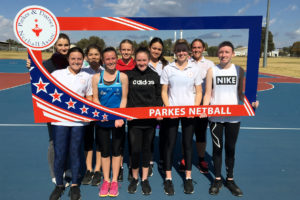 After a longer season than normal, the Parkes Junior Netball competition wrapped up Division 1 and Division 2 last Saturday. Division 1 was contested by Eagles and McGrath’s United, umpired by Lisa Nutley and Mel Evans. The two teams had very close games throughout the season, and the grand final was no exception. Eagles managed to take the win 19-12. Jorja Davis was awarded player of the grand final for her outstanding team play and positioning on the court. Eagles coach Calli Miller said:

“The girls just didn’t give up today, and they haven’t all season. I could not be happier with the end result.”
Division 2 saw two outstanding teams, Wildcats and Eagles, with the game umpired by Julia Dunn and Ally Bush. Wildcats came out victors, 22-10, with the player of the grand final awarded to Lucy Hall (Wildcats).

From the sideline, it was noted that all the girls played extremely hard, and they should all be proud of their efforts.
Congratulations to Lisa Nutley and Mel Evans getting their National C Badge on Saturday.