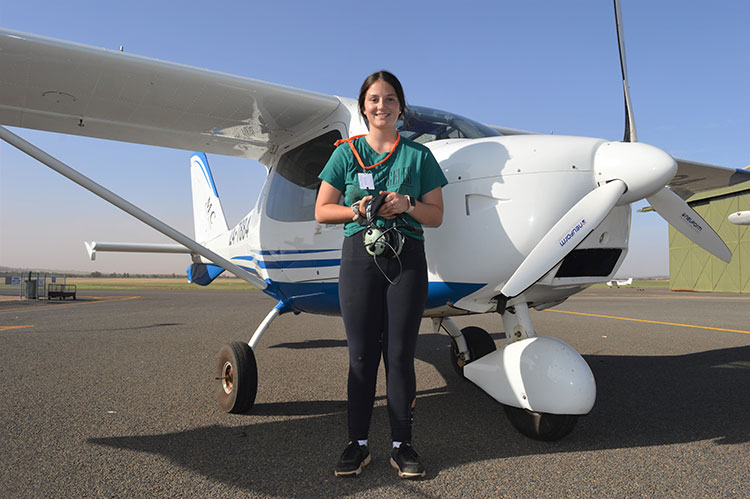 Ever since Ella Ross set foot on a plane for the very first time she knew she wanted to learn to fly.

Her first flight was a present for her 12th birthday, and last week the 15-year-old Year 10 student did her very first solo flight.

“I flew to Darwin with my Nan and Pop when I was seven, and when we got off I told them I wanted to be a pilot. I had to wait until I was 12 though to start flying lessons. After my first lesson I was even more keen.”

Ella did her first lessons with Dale Redfern, chief flying officer of the Parkes Recreational Aviation Centre, and remembers how she never said a word for the first six lessons.

As she stood proudly next to the two-seater Flight Design MC plane she flew all by herself, her current instructor Brett Preisig of the Parkes Aero Club praised her hard work and diligence. “Ella is a great student who is very thorough and business-like when she operates a plane.”

Ella is not daunted by the ‘flight path’ ahead, which includes the last of five exams she has to sit, building up more hours of solo flights and training to get her passenger and navigation endorsements and flight certificate.

She might take her sister as her first passenger. “I think my mum will be too scared.” Ella is not yet certain where the flying will lead her after school, but she thinks flying solo around the Australia and even the world “would be pretty cool”!