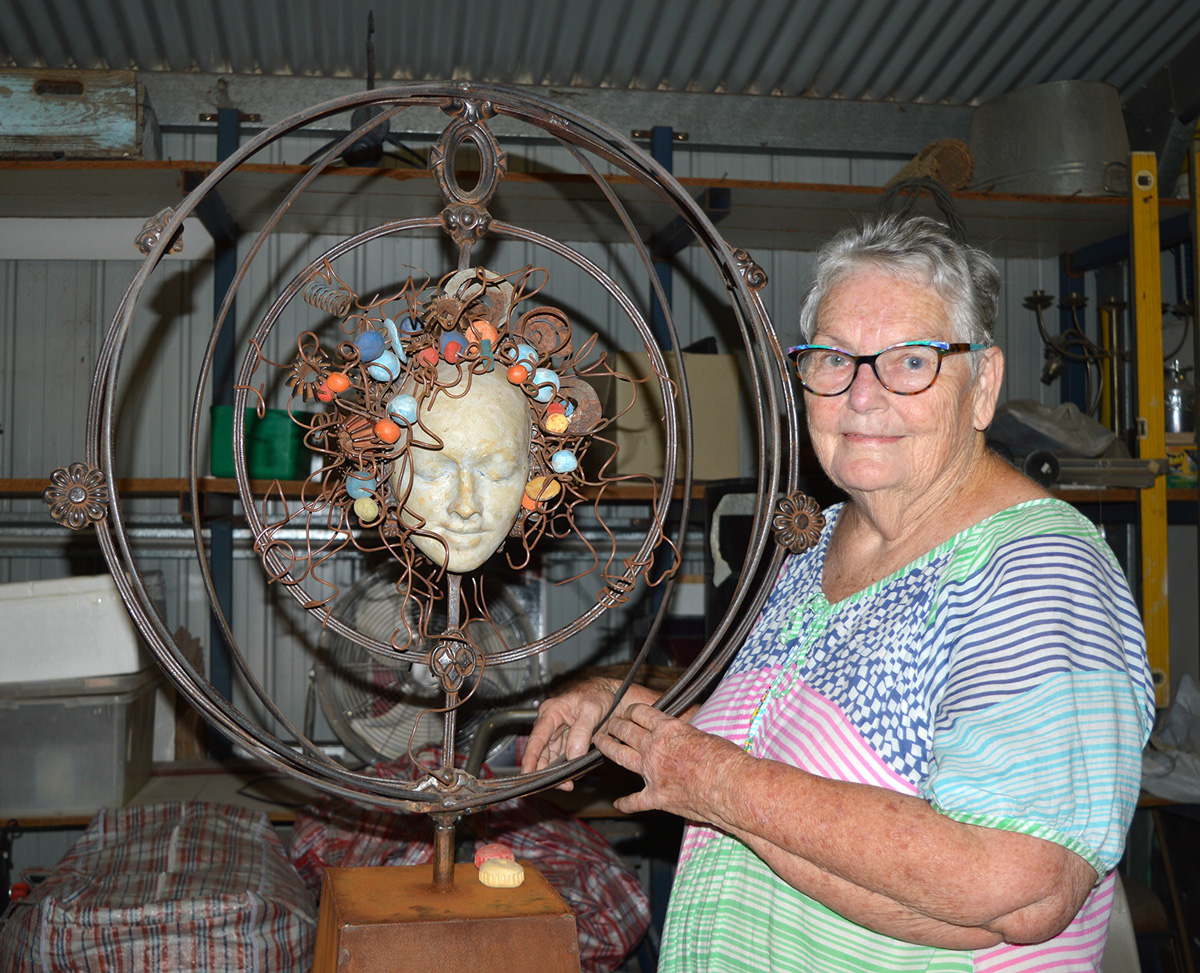 Cultural Lifetime Achievement Award recipient Elsie Mahon’s favourite medium is painting with water colours, but she has also started bigger projects doing sculptures with rusty old things like this one she is working on at the moment.

As a little kid she would sit in the corner whenever visitors came to the farm and draw them on brown paper off the bread using charcoal out of the fire.

“We had a neighbour who was a really good cartoonist and he used to show me how to draw people. “We lived in the country right out past Condo and never had a classroom. We had correspondence with mum.”

Elsie loved it when someone came to the farm, so she could draw them. “If I liked them, I made them look pretty good, and sometimes I would give them big ears and noses.”

She said her father would get so annoyed with her saying she would offend them. “He used to say I would be much better off learning in the kitchen how to cook with my mum so I could look after a husband one day. Nobody had done any good with drawing,” he would say.

When Elsie moved to Parkes with her husband Henry and two children 54 years ago, she enrolled in every single creative course offered at TAFE. “I did soft furnishing, cake decorating, pottery and more, and then became an art and craft teacher until TAFE stopped hobby teaching. She continued teaching offering classes at her gallery at the nursery she and her husband had bought in Bogan Street, and did not stop for the next 30 years.

Elsie also fulfilled her passion for gardening by designing many gardens in Parkes and winning champion garden for every garden while they’ve lived in Parkes. “My grandfather was a market gardener, and I used to follow him around. Gardening is also creative and another medium to play with. There is so much friendship that goes into a garden from exchanging cuttings and plants and that creates a lot of memories.

“It is lovely to be recognised,” said Elsie of her award. “You don’t do it for recognition, but because it’s your nature. I love to help other people, and love to get involved in the community.”

Elsie is also very happy with how far arts has come in the Parkes Community. “For 40 years Warwick Tom and I and a couple of other people have worked to convince Council that we need more support. I feel like we are in a really good place now and that we have finally achieved what we’ve been chasing.”

Elsie’s passion for being creative has enriched her life in many ways. “For a kid that only went to 6th class as that’s as far as we went in correspondence as we had to start working on the farm, it was good to discover there’s a lot more to life than that.” And when she started her teaching job at TAFE, even her father had to acknowledge she had achieved the impossible in his opinion. He said to her: Well, I never ever thought anyone could make a living doing that.”