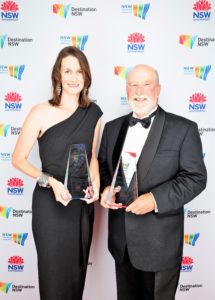 The Parkes Elvis Festival has won many awards, but entered new territory last Thursday at the 2018 NSW Tourism Awards at Luna Park in Sydney. It was named best festival in the State for the third consecutive year and inducted into the NSW Tourism Hall of Fame.

“To be inducted into the Hall of Fame is the icing on the cake for what has been the most successful year to-date for the Parkes Elvis Festival,” said Festival Director Cathy Treasure.

“It is also recognition of all the hard work and dedication of our fantastic volunteers, supporters and staff who have made the Festival what it is today.”

Parkes Elvis Festival was one of six finalists in the Festivals and Events category, taking home the title ahead of the Australian Celtic Festival, Canowindra International Balloon Challenge, Deni Ute Muster, Eat the Street Lismore and Woolgoolga Curryfest.

Parkes Shire Mayor, Councillor Ken Keith OAM said it was a stellar achievement for a community generated event that had significant economic impacts for Parkes and the wider Central NSW region.

The 2018 Festival attracted more than 25,000 visitors, had a global media reach of 200 million and injected $13 million into the regional economy. Parkes Elvis Festival has progressed to the national level at the QANTAS Australian Tourism Awards in Launceston on 1st March next year.