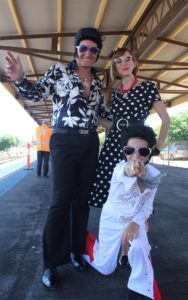 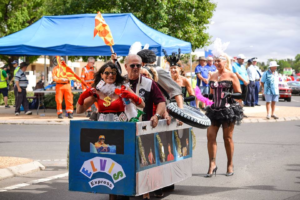 • 2017 Ultimate Elvis Tribute Artist Contest was won by Brendon Chase from New Zealand, followed by Sean Spiteri from Sydney and Matt Birse from Adelaide in third. Brendon will travel to Memphis, USA, to represent Parkes at the Contest Semi -Final during Elvis Week in August.

• The 2017 Miss Priscilla, Face of the Festival, was awarded to Jackie Batt of Parkes.

Providing high quality education and care for children from birth
to 6 years!

Poets’ Breakfast: The Poets’ Breakfast has become a legend of its own. More than 200 poetry lovers shared breakfast and some laughs at the Parkes Bowling and Sports Club. The MC was Barry “Elvis” Green, who entertained the rather crowded crowd with Elvis songs,. The competition was fierce – and funny. Parkes’ Amy But- ler won the Best Novice Poet for her poem ‘The Elvis Train’ – a jaunty verse about the Elvis Express featuring Mayor Ken Keith. Jane Ferrari’s hilarious poem ‘Hooked Up In Parkes’ took out both the Open Contend- er and People’s Choice awards.

Outback Elvis: Around 60 people rocked up to the Parkes Shire Library for the launch of the Outback Elvis book. Authors, John Connell and Chris Gibson – both aca- demics and well-seasoned festival fans – compiled a collection of anecdotes and personal stories that detail the evolution of the festival from its humble beginnings to the event that has quite literally put Parkes on the international map. Parkes Shire Li- brarian Shelly Buckle said it had been her dream to launch a book during the Elvis Festival.

Miniature Elvis Express: A group of repeat festival-goers from Sydney loved the Elvis Express so much that they made their own. Vivian Cronin, Graham Gardiner, Elizabeth

Bromhead and Mort Hansen kept the party going when they disembarked for the Elvis Festival. The novice train engineers scav- enged an old box from a stall holder, and decorated it to recreate the Elvis Express, which they drove in the street parade. They eventually departed the train in Cooke Park, but various other Elvis revellers caught the cardboard train over the weekend, with one group riding it up and down Clarinda Street, before it was finally derailed.