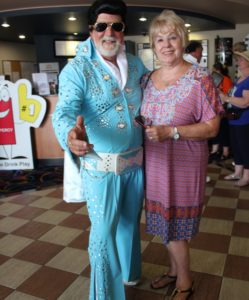 Viva Parkes Library!: Parkes Library is hosting a huge range of events for the Parkes Elvis Festival. Join the library team for a movie, photo exhibition, book launch and of course air conditioning! The Library will again become a boutique movie cinema showing Viva Las Vegas and Elvis Lives in Parkes (SBS documentary), Speedway, Elvis and Nixon and This is the Story telling the story of Parkes Elvis Festival by the people who helped shape and
create the event into the phenomenon it is today. Elvis and Nixon, starring Kevin Spacey is shown today at 7pm at a special event. It is a limited seats event. Tickets are $5 to be pre-purchased at the Library. For the second year running the Library is presenting the Parkes Elvis Festival Photo Competition and Exhibition. There are 160 photos, capturing past Festival moments, on display until Sunday. The winners in the various categories will be announced today at 4pm. The black and white work of David Carswell, an Australian photographer based in Manila, is also on display of Elvis performance nights in the Philippines. Call Parkes Library on 6861 2309 for more information.

Morse code telegrams: While the Elvis Festival takes you back in time, why not send a message the old way too? Today and tomorrow you will be able to send telegrams by morse code to anywhere from outside the Telstra Shop in Clarinda Street. There will be operators to answer your questions and help you send a message. Telegrams lodged by the general public will be sent to Beechworth by morse code and received on souvenir stationery and posted
to their destination. The morse code instruments are the same used to send and receive messages in the telegraph network since the 1850’s until the morse code was withdrawn in 1962. However it remained in Parkes and used as an
order wire, until the last operator was transferred in 1965, and then withdrawn completely. As teleprinters were introduced from the 1940’s, they progressively took over the system in all major post offices until the telegraph service was completely withdrawn in 1988. Locals Eddie Parrott, Keith MacRae and Peter Cannon, members of the Sydney Morsecodian Fraternity, will be at the display, while Sydney members attending will be Brian Mullins and Cec Mann. On display will also be Ham Radio morse equipment that is still being used today.

Gospel Service on Sunday: The single biggest event of the Festival after the Street Parade is the Parkes Elvis Gospel Service presented by the 11 Combined Churches of the Parkes Ministers’ Association. Last year around 8,000 people attended the inaugural service in Cooke Park. This year’s artists include in international line-up with Pete Storm (UK), Sista Jacqui (USA), Keno NSW Special Feature Artist, Mark Borg, BornAgainElvis (also Guest
Preacher), Royden Dononhue, Gavin Chatelier, Stephen Cheney, I.C.U. Gospel Choir and the Parkes Shire Concert Band Inc. Stephen and Nerallie Cheney, Co-Ordinators of the event invite people to arrive early and bring their own chairs or picnic rugs and enjoy breakfast in the park. Nerallie said there would be a large outdoor screen this and improved sound. The organisers are also looking for volunteers to help before and during the service with setting up, marshalling, handing out programmes and other jobs. Collection proceeds, after expenses, will go to the local schools ministries and the East Timor Mission.