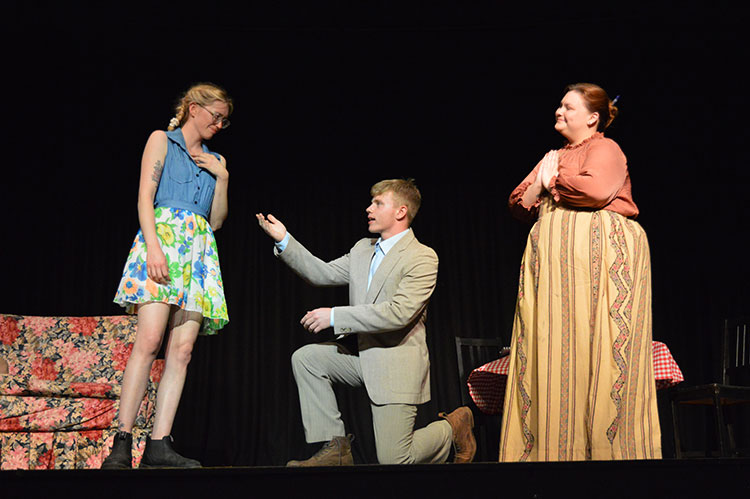 Emily Webb, Hamish Sanderson and Jess Morgan during a rehearsal of The Proposal.

The Arts Revival Festival from 14th to 19th December aims to end a year of no creative stimulation and revive, celebrate and foster artistic activity in the Parkes Shire community.

The festival, organised by the Parkes Shire Arts Advisory Council and Parkes M&D Society, has a full program of a variety of workshops, three one-act plays, an art exhibition, a craft market and various musical performances.

“As there was hardly any creative stimulation during this year of the pandemic, the festival aims to help people have something to work towards,” said spokesperson Lisa Ramsay.

“We hope to make it an annual event and introduce new facets of artistic endeavours into our community. That is why we have included the improvisation workshops for instance for kids and adults.”

Improvisation, a collaborative method of creating live spontaneous theatre that is funny, often touching and frequently poignant, would broaden participants’ skills in how they react and be more authentic on stage, according to Lisa.

“It opens up a different avenue on stage, as musicals might not be for everyone.”

If there is enough interest after the workshops, Lisa is keen to start an improvisation group meeting on a monthly basis to inspire continuous engagement in new artistic endeavours. The workshops will run on 18th and 19th December.

Lisa is also very excited about the three one-act plays to be performed at the festival. “The M&D have not done a play for more than seven years, and we should attract a different audience.” The plays are The Proposal and The Wedding, adapted from Chekhov’s original plays to a farming landscape in 80s Australia, and a junior play Mother Duck and the Golden Goose.

The Arts Revival Festival is a wonderful way to end this tough year on a cheerful note. See the full program of events on the Parkes Shire Council’s website. Tickets for the shows are available online.