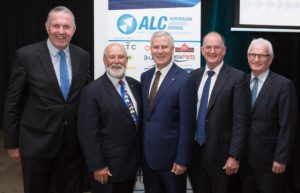 A wave of excitement and optimism washed over Parkes this week as the $8.4 billion Inland Rail project not only brought 400 conference delegates to town, but Council has received an unprecedented number of enquiries from industries interested in locating to the region.

“The interest in Parkes is phenomenal; we are on the verge of something big,” said Parkes Shire Council General Manager Kent Boyd. Keynote speakers at the first ever Inland Rail Joint Industry Conference held at the Parkes Leagues Club this week agreed that it was an exciting time for our town. “Parkes is set to become Australia’s most important inland logistics hub,” said Anthony Albenese, shadow minister for Infrastructure, Transport, Cities and Regional Development, while Deputy Prime Minister and Minister for Infrastructure and Transport said it was very appropriate to have the conference in Parkes located at the epicentre of the north-south Newell Highway, the eastwest rail-line and the Inland Rail route.

The Deputy Prime Minister had more good news announcing that ARTC had awarded the first two local contracts valued at $7 million in total to Ausrock Quarries from Parkes and Calvani Crushing from Forbes resulting in 16 new jobs being created. The two businesses will supply 195,000 tons of track ballast and 120,000 tons of capping for the Parks to Narromine section of the rail track.

Ausrock Quarries Director Simon Shannon said the benefits of Inland Rail were generating a lot of optimism locally.
In addition ARTC has opened a shop front in Clarinda Street to provide contract information for small businesses and locals looking for jobs on Inland Rail. “There are experts to talk people through it, as well as visuals and touch screens for anyone interested in finding out more about the project,” said Michael.

Kent Boyd said investors were looking to Parkes because of its unique position being the only place in Australia where all the major routes intersect.