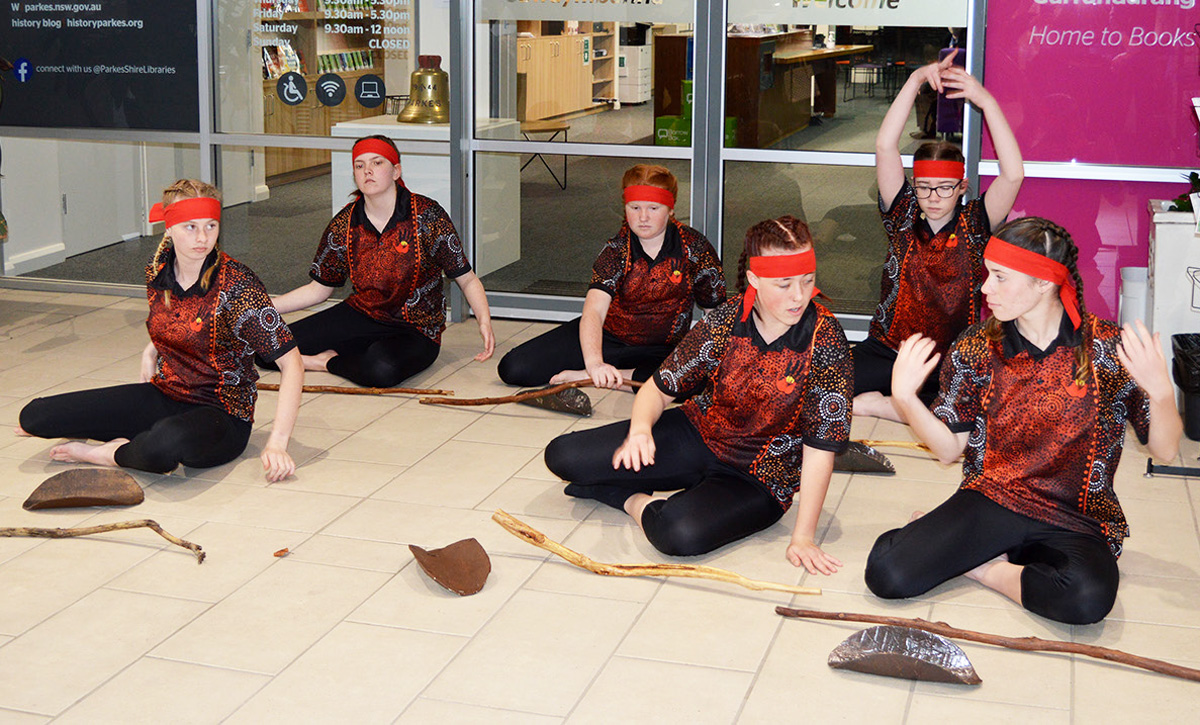 The dance group from Parkes High School performed two dances at the opening of the permanent Wiradjuri Exhibition at the Parkes Library and Cultural Centre last week, which is now open to the public.

Local Wiradjuri artefacts have been given a permanent home at the Parkes Library and Cultural Centre after it was identified as a priority project by the community.

Parkes Shire Council has collaborated with representatives of our First Nations community to curate the Wiradjuri Ngurambang Exhibition that was officially opened last week by the Parkes Shire Mayor Ken Keith OAM.

Pieces in the exhibition include a range of artefacts from local Wiradjuri community members, from the Henry Parkes Museum collection as well as pieces sourced from local Wiradjuri artists. Objects include hunting and gathering tools, grinding stones, digging sticks and spears, coolamons, dilly bags and ceremonial pieces.

“The Wiradjuri Ngurambang Exhibition will give voices to our artefacts,” said exhibition curatorium member and environmental artist Ronda Sharpe. “Our local First Nations community has been working with Council to bring the project together and excitedly gathering items for the exhibition.”

The Mayor said it was just wonderful to see an exhibition of this nature produced with so much quality and taste. “The Wirajuri Ngurambang Exhibition is a cultural gift to not only the people in our shire but also to many visitors who come to Parkes giving insight into the Wiradjuri language and culture as well as the history of Parkes, present and future.”

The digital component of the exhibition, produced by Sean James Cassidy of Ub Ubbo, complements the display and provides an introduction to Wiradjuri culture. The organic filming style seeks to highlight the importance of looking closely at and listening carefully to nature, our Elders and each other.

The exhibition was funded by the Australian Government’s Local Roads & Community Infrastructure Program and is part of the Let’s Get Digital initiative by Museums & Galleries of NSW.