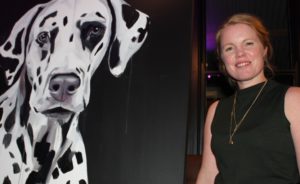 The new upstairs Hart Bar at the Railway Hotel made a grand entrance onto the Parkes social scene with a bold and striking exhibition by local artist Jac Clark. If locals have not seen Jac’s signature brightly coloured art works, they will be familiar with her street art creations of Elvis, the girl reading books, the astronaut and other, that went on display earlier this year in the Central Business Distrcit.

Jac’s art has had a presence in the Railway Hotel since Kasie Ferguson and Bianca Sheridan became owners six years
ago. So when the trendy new bar was being planned, there was no question about who to ask to look after decorating the walls for the opening. Jac decided to step away from her signature bright colours and ventured into the world of monochrome for the first time to explore the boldness of using black and white for her paintings.

She worked for 12 months on 14 paintings for the exhibition titled Figure. She did not specifically choose her subjects but over time ended up painting a variety of subjects including people and animals. At the official opening of Hart Bar last Thursday, people were naturally drawn to the huge black and white images in the beautiful space created by Josh Fisher, the builder, and Beck Thompson, the designer.

The complete product left guests feeling like they could be in any trendy city bar. “It is just amazing what they have achieved here,” was the general consensus from many. “We can’t believe this is actually in Parkes,” others said.
Jac said she had also received very positive feedback with many prints sold and some enquiries about commissions, while the cow painting proved to be a hit. The artworks can be seen online at www.morabon.com.au