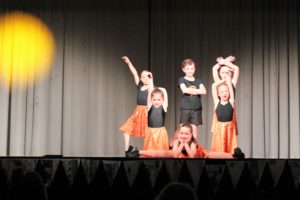 Reportage was the headline act at the Parkes School of Dance end of year concert held at the Parkes Leagues Club on Sunday. The Robert Wilson auditorium was almost full to capacity, with an audience of nearly 500 flocking in to grab the latest headlines. The concert was the culmination of a year’s hard work for the students and teachers of Parkes School of Dance, with routines presented from the preschool classes all the way through to the performance groups.

An otherwise eclectic array of dance styles and abilities was united by the journalistic theme, providing an engaging link between the various routines. The concert program was endearingly designed in a broadsheet format, and the decorative bunting was made of newspaper. Some of the dancers even structured their choreography around the happenings of a newsroom.

Of course the real good news story here is the kids themselves, most of whom had spent the year refining their movement and learning their routines. The youngest performers to tread the boards were preschoolers, who were joined on stage by their teachers as they wowed the crowd with their diminutive dance-moves.

From Petite Ballet Junior through to Senior Contemporary each performance was a highlight in itself, although one of the more memorable moments came when young Melinda McKeowen took to the stage. Melinda has Joubert Syndrome, so Parkes School of Dance arranged for an assistant to help her with her routine, which she performed with sheer vibrancy. Melinda’s mother Amanda Clarke said Melinda loved getting dressed up and performing. “Melinda is often left out of things because she can’t walk on her own and Parkes School of Dance made it possible
for her,” she said.

For all the young performers and their families, the concert was the good news story of the day.