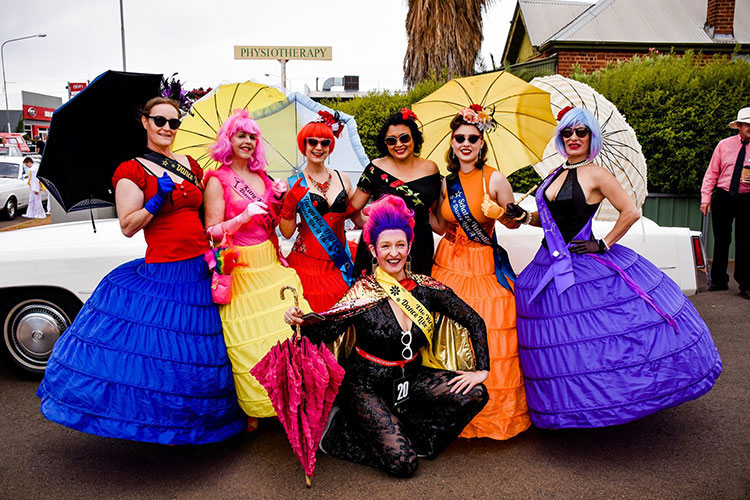 ALL DRESSED UP… There was no shortage of very vibrant and colourful costumes for one of the highlights of the Parkes Elvis Festival, the Northparkes Mines Street Parade.

Bushfires, heat waves, dust storms and even a destructive thunder storm could not stop the 28th annual Parkes Elvis™ Festival delivering another year of phenomenal performances with approximately 25,000 fans from Australia and around the world dressing up for some hip swivelling action.

The five-day celebration of The King featuring more than 200 shows not only blew away festival goers, but also managed to raise thousands of dollars for the Rural Fire Service, WIRES and the Red Cross.

There were plenty of opportunities to contribute with the Mayor’s appeal and feature artist Dean Z’s contribution to little six-year- old Sebastian Bodiam dancing to Elvis outside his grandma’s shop, RFS collections in Cooke Park and an impromptu show by two of the original Wiggles.

“The Parkes Elvis Festival has grown into a global phenomenon, bringing people together from all corners of the world. We’ve had an electrifying five days of entertainment which saw Central West NSW transform into a vibrant cultural hub like no other,” said Festival Director Cathy Treasure.

US Elvis Tribute Artist Dean Z wowed audiences with his energetic tribute to the King, international sensation Toki Toyokazu of Sendai, Japan won the the preliminary round of the international 2020 Ultimate Elvis Tribute Artist Contest, the 2020 Priscilla Face of the Festival was awarded to Shania Sarsfield of Wellington, and the Northparkes Mines Street Parade saw over 10,000 people line the streets to enjoy Elvis-themed floats, vintage cars, motorcycles, marching bands and colourful costumes.

Fans are already planning costumes for next year’s theme Speedway.