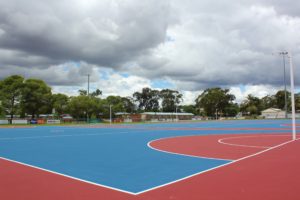 The world’s most exciting netball could be making its debut in Parkes next year. Parkes and District Netball Association is looking to bring Fast5, a modified version of netball, to Parkes following the completion of the eight netball courts to worldclass standards in October.

According to Vice-President of the Parkes and District Netball Association, Wally Norman the recent upgrade of eight netball courts at McGlynn Park, included markings for the Fast5 game. “We are very excited about the Fast5 markings and keen to introducethis game in Parkes next year as an adult competition.”

Wally said they were very happy with the  upgrade of the courts at a cost of $110,000. The courts are making a statement with its brand new colours in red and blue with white line markings. The colours were chosen to tie in with the colours of the Parkes Spacemen.

Specialist surfacing company Court Craft from Sydney who did the work, said it was the first time these colours had been used for netball courts. They repaired existing cracks and applied three coats of a non-slip, colour treatment
over the existing asphalt to produce a shock absorbent, all-weather playing surface. The new courts complement and enhance the existing facilities within the McGlynn sporting precinct, which includes the state-of-the-art Mariah Williams Hockey Field.

The world-class facility had been noticed with congratulations from Netball NSW on ‘the fresh new courts that look terrific’. Wally said Parkes would once again host the annual Netball Carnival next year with up to 55 teams competing, while all the regular competition would also return.