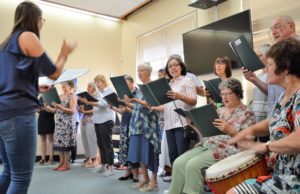 In keeping with this year’s theme, Love Your Life!, Neighbourhood Central organised a fun filled program with a diverse range of activities. “We opted for something different this year to encourage the younger members of the demographic to be more involved,” said Jenny Short.

That is why the week started with an ‘ohm’ when 17 senior citizens from Trundle, Tullamore and Parkes attended Monica Lea’s chair yoga class after Parkes Shire Councillor Pat Smith officially opened the festival.

“Attendees were keen and willing to try the poses, and really enjoyed savasana and relaxation at the end,” said Monica. She said some participants were interested in attending her ongoing Friday gentle class, while there were also some who requested her to start a chair yoga class. “It was lovely to be involved in the Seniors Festival.”

On Tuesday Beth Thomas and Suzie McNamara taught participants to play bridge. “They all really enjoyed it,” said Beth. “Some want to continue on with beginner lessons and hope to eventually join the Parkes Bridge Club. Suzie and I really enjoyed taking the two-hour class which extended into two-and-a-half hours.”

For those interested in writing their life story, Dan Fredericks from the Parkes Library offered some tips on writing to a group of 14 people, while Alice Milne from the Pink Orchid Florist offered a posy making class. The monthly lunch for Neighbourhood Central clients happened to fall in the festival week, and on Wednesday they were entertained by the newly formed Parkes Community Choir with a variety of songs, including a Zulu song from South Africa.

On Thursday Rosedurnate residents joined other senior citizens on a visit to the HARS Aviation Museum at the Parkes Airport. The week ended on a fun note with two belly dancing classes presented by Nicole Kennedy.

Neighbourhood Central’s Jenny Short and Beverley Drabsch were both very happy with the attendance and interest shown, especially by members of the community who were not clients.