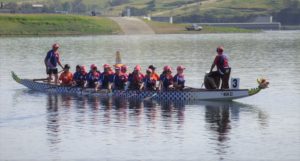 The Parkes Dragon Boat Club splashed onto the NSW regatta scene in Bathurst on Sunday by winning two second places at their very first race event. Most of the five-month-old club’s fifteen paddlers entered the Western Region Regatta as novices anticipating only to learn and gain valuable race experience. As soon as the team dipped their paddles into the beautiful, glassy Ben Chifley Dam, they stepped up and exceeded all expectations.

Both the women’s and men’s teams combined with the Sudu Dragon Boat Club from Wollongong and secured a place in the finals after three 200m heats each.

The women’s race was extremely tight with Parkes/Sudu missing out on the gold medal by a split second in a time of 1:02.75. The men’s team followed suit and also secured second place in a time of 56.91.

“For many of you to experience your very first regatta and come away with a silver in both the women’s and men’s opens is a remarkable achievement,” said President Bill Thomas. “What a privilege it was to share the moments in the boats with the most fabulous, fantastic fifteen paddlers you could ever wish for.”

Coach Warren Edwards was very impressed with the team’s performance and said: “The team friendship, bonding and spirit was evident from early in the morning and the gutsy performances just kept coming all day. I could not have been prouder of everyone on their first outing as a team.”

Bill congratulated Warren on achieving Level 3 Sweep status at the regatta, and both Bill and Warren thanked Regatta Coordinator Deb Abela for her tireless work organising the teams.

The Endeavour Dragons also attracted a lot of attention with their colourful race shirts receiving lots of compliments.
The Parkes Dragon Boat Club is steadily growing and always welcome new members or anyone who would like to come for a try-out. Details available on the club’s Facebook page.