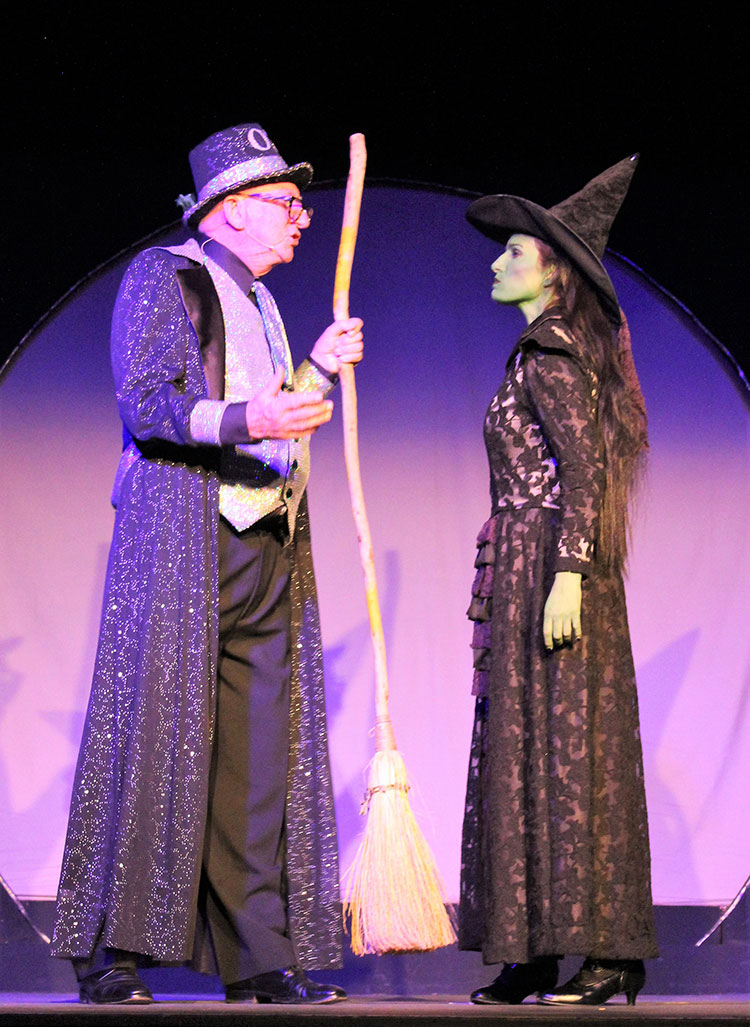 Bill Jayet as the Wizard with Hannah Symonds, the Wicked Witch of the West.

Bill Jayet proudly wears the label of veteran performer with the Parkes Musical and Dramatic Society.

He has been performing for over 56-years after he first trod the boards at age 18 in the Forbes M and D Society production of Dinnie and the Witches.

Amateur theatre has been in his blood ever since. His debut with Parkes M and D was as Ali Hakim in the 1981 production of Oklahoma. He is probably best remembered for his incredible portrayal of Fagin in the 1984 and 2009 productions of Oliver, for which he won a Canberra Area Theatre (CAT) award for Best Actor in a Musical. Rumour has it he was offered a role in professional theatre after the 1984 version, but turned it down.

Throw Bill a character role you can bet your bottom dollar he will bring it to life in his own unique, inimitable way. Bill was made a life member of Parkes M and D in 2018 for his dedication and commitment to productions over the decades and returns for (what he calls) his final hoorah in Wicked, as the Wizard.

We salute Bill, the gentleman he is, the roles he’s played, the quality of characterisation he achieves and the inspiration he provides to everyone involved in the society.

Do not miss Bill’s final performance with the opening of Wicked tomorrow until 23rd May. It is the first Parkes M & D production in 12 months. The society hopes to get back on its feet with this production after COVID has put its future financial viability at risk. Get your tickets online at www.parkesmandd.com.au or from Regional Business Supplies. Dine & Discover vouchers are accepted, email your ticket request with vouchers to parkesmandd2870@gmail.com.