Last Friday saw an exciting event at the Parkes Early Childhood Centre (PECC). It was the premiere of a song and video clip called Fire Heart and was the culmination of a several years-long project.

Children from PECC and invited guests attended with the Welcome to Country, delivered by Geoff Anderson.

The project arose from discussions between Lindy Farrant, much-loved Centre’s previous director and Sean James Cassidy, local artist and former pupil of PECC. The idea was to create an installation to introduce the young children of Parkes to the culture of this area’s First Peoples, the Wiradjuri.

The concept Sean developed, took the form of six story branches which had been shaped and patterned by the natural world, growth, the weather, animals and insects. These were then added to with carvings of Wiradjuri iconography by Scott Sauce Towney and Scott Turnbull. 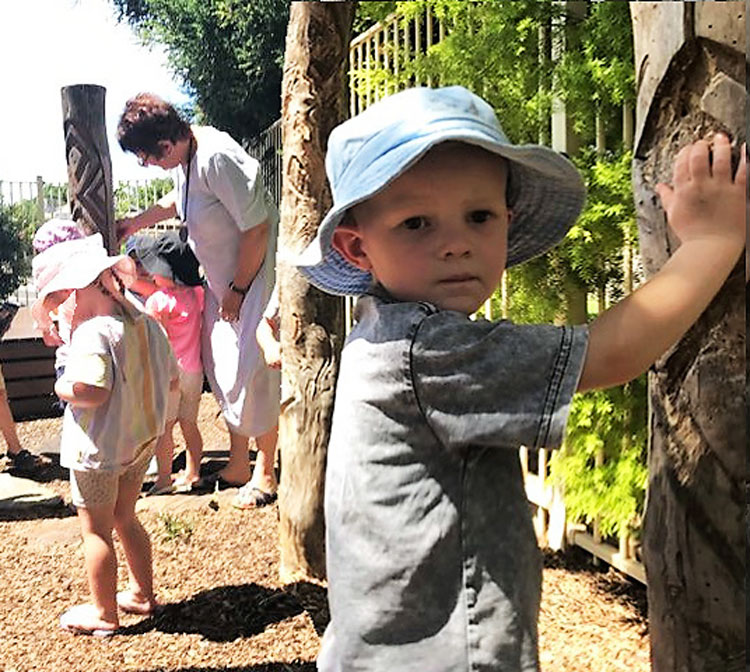 Each of the six story branches represents a word encapsulating PECC’s values; care, create, kind, truth, respect, share. It is hoped that the story branches and their textures will help to stimulate interest and imagination, providing a different avenue for learning.

The video clip that accompanies the song features the voices of some of the children at PECC. Under the tuition of Kelly Thompson, the children were recorded speaking the six words in Wiradjuri. These were then highlighted with animated sign language, creating a video clip in three languages, English, Wiradjuri and Auslan (Australian sign language). Sean’s uncle, Paul Cassidy, who was born deaf, provided his expertise for the signing actions and said it was a privilege to be included in this project. The song Fire Heart was written by Jason Murchie with the backing of the Parkes Wiradjuri Language Group and features Drew Farrant-Jayet, Lindy Farrant and Bill Jayet’s son, playing lead guitar. Other elements of the music include sound samples of locally played didgeridoo and bull-roarer mixed to produce the sound of a human heartbeat.

The song Fire Heart now joins its part-ner song Nuganirra which was released previously and was selected to represent Mother Tongue Day in 2021.