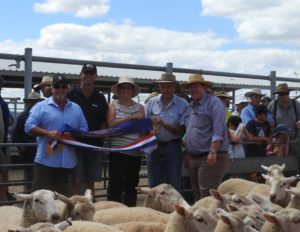 A crowd of around 300 people attended the Forbes First Cross Ewe Sale at the Central West Livestock Exchange at Daroobalgie last Thursday where more than 11,000 ewes were sold. Troffs Pastoral Company claimed the Glamis Shield for the best-presented pen of ewes. There were two new judges this year, Jenny Bradley and Barry Harper. Geoffrey Jones and family of Trundle took the coveted shield home in its 37th year.

Adam Chudleigh of McCarron Cullinane Chudleigh said: “The yarding was in magnificent condition.” He attributed it to the specialty breeders in the Forbes region coupled with a fantastic season. Adam said a large percentage of the
yarding was sold to other areas throughout NSW, with strong interest from buyers from the Riverina, Southern and Central Tablelands. In all a total of 11,319 First Cross ewes were sold. The Quade family of Trundle had the top priced pen of ewes at $280.