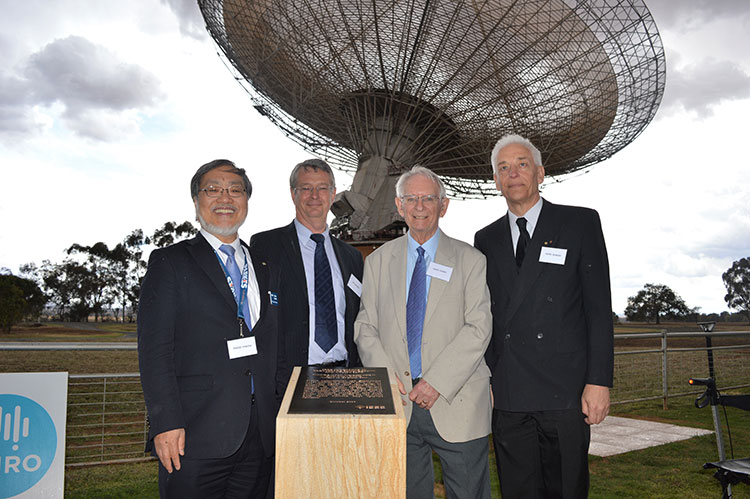 It was as if the galaxies out there also applauded the singular honour bestowed on the Parkes Radio Telescope last Friday when rain started falling shortly after the dedication of the very first IEEE Milestone Award in Australia.

The largest technical professional association in the world, the Institute of Electrical and Electronic Engineers (IEEE), has honoured 202 significant technical achievements all over the world. Last Friday the very first Milestone Award in Australia was unveiled at CSIRO’s Parkes Radio Telescope dedicated to its contribution in receiving Apollo communications from the Moon on 21 July 1969 (AEST).

CSIRO’s Parkes radio telescope and NASA’s Honeysuckle Creek stations in Australia received voice and video signals from Apollo 11 moonwalk which were redistributed to millions of viewers around the world. The televised images from Parkes were superior to other ground stations, and NASA used them for much of the two-and-a-half hour broadcast of the moon walk. About 600 million people watching it live around the world were able to witness this signal moment in history, with the greatest possible clarity, thanks to the Parkes Radio Telescope.

Parkes was one of the first radio telescopes to use the newly developed ‘corrugated feed horn’, and Parkes became the model for the NASA Deep Space Network large aperture antennas.

“As President of IEEE I am very honoured to join my colleagues at this occasion today,” said Toshio Fukuda, and commended the IEEE Milestone program for their tremendous effort.

Several speakers referred to that “moment in history that would stop the world” with David Cooke, who was a radio engineer at the Parkes Radio Telescope at the time of the moon landing, giving a very personal account of the historic day.

He confirmed the scene in the movie The Dish of the wind starting to gust at 110km/h, but “John Bolton who was the Director knew the system very well and he directed the driver of the telescope to keep going. So right on time as the camera was turned on, we began to receive images.”

David said it was only at the recent commemoration of 50 years since the moon landing that he really appreciated how significant it really was. “I think at the time I felt like it was just another day at work. Although afterwards I went down and outside and I looked up at the moon and I thought to myself: ‘Three people are up there and we helped put them there. How amazing is that!’”

IEEE History Committee representative David Burger said it was a very distinguished occasion and a big deal for Australia to be honoured by the IEEE.

“We are delighted to have you here celebrating such a wonderful occasion,” said Parkes Deputy Mayor Barbara Newton. “We love our Dish and we are very proud of everyone who has worked here over the years.”

The IEEE has over 400,000 members worldwide and in excess of 8,000 members in Australia, who are employed in all aspects of electrical engineering and electronics.

The IEEE Milestones Awards programme recognises the technological innovation and excellence for the benefit of humanity found in unique products, services, and patents. They honour the achievements, rather than a place or person.