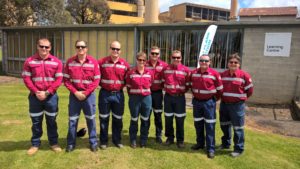 Northparkes Managing Director Jim Fowler said: “We are enormously proud of our competition team. Our consistent success at this competition reflects the team’s hard work to stay at the leading edge of emergency response practices.” Jim congratulated the winning team from Newcrest-Cadia in Orange.

Team member Linda Snyman, who was one of only three women to compete, said the scenarios set up by the adjudicators were excellent. “Even though everything was staged using actors, it was all very real and we were responding to incidents that could possibly happen at our mine. Taking part in the competition helps to reinforce all the training that we go through on site and has made me a more confident and capable responder.”

The 2017 competition took place in Yallourn, at Energy Australia’s Power Station. Teams competed in a number of challenges demonstrating theoretical and practical mine rescue skills over three days. Linda said: “We are known for our focus on theory and it paid off when we won the overall theory award.”

Northparkes currently has 24 active Emergency Response Team (ERT) members who train year-round to ensure they are ready to assist in case of an emergency. Northparkes Manager People, Safety and Environment Stacey Kelly said: “Competitions such as this allow us to practice our skills and benchmark ourselves against others in the industry.”