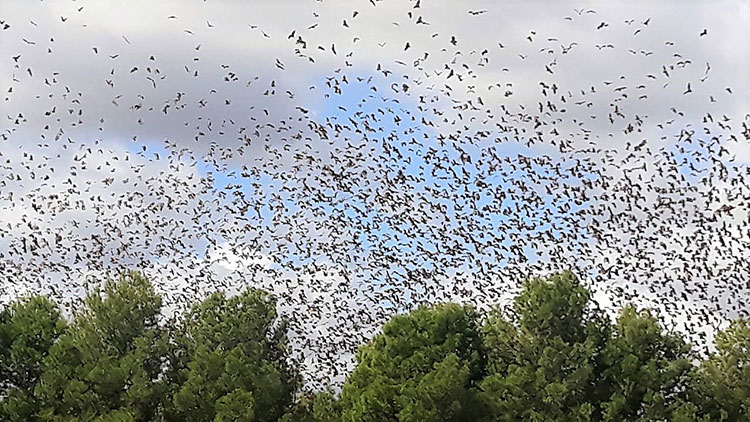 The smell and noise of large colonies of Little Red Flying Foxes visiting Parkes at the moment have caused concern for residents, but they will only stay temporarily and they perform important ecosystem services vital for the regeneration of native woodlands. (Photo: Linda Snyman)

You might hear them before you see them, but they seem to appear as if out of nowhere and fill the sky instantaneously!

Parkes Shire is currently playing host to colonies of Little Red Flying Foxes. This species of fruit bat periodically visits the Parkes region as they travel across Australia in search of food.

Parkes Shire Council said in a press release this week while flying foxes generally cause little disturbance in urban areas, Council appreciated that they could have a significant impact on the day to day lives of residents, and that their current abundance has caused concern among locals.

“As native blossom specialists, they follow eucalyptus flowering events around the eastern states of Australia to find food, and they generally move on to new places when food becomes unavailable, or when temperatures get too hot or cold,” said Michael Chambers, Parkes Shire Council’s Environmental and Sustainability Coordinator.

“It is important to note that all species of flying foxes are protected under State and Federal laws, making it illegal to capture, harm, or otherwise interfere with any individual or group.”

Council’s Director Infrastructure Andrew Francis said attempts to disburse the Fly-ing Foxes, such as startling them with loud noises, guns, or fireworks were ineffective. “Dispersal actions (aside from potentially breaching the law) are often counterproductive because bats rarely respond well, they tend to squawk, urinate, and defecate in response to stress. This results in increased commotion and unpleasant smells, exacerbating an already uncomfortable situation for the residents living in close proximity to them,” said Andrew.

“After seeking expert advice from several NSW Government agencies, Council has been told that they should start to see a drop in numbers soon, as temperatures decrease, food resources become depleted, and large colonies begin to disperse into smaller maternity camps for females to give birth and care for their young,” Andrew added.

Major environmental events, including the severe drought, continued deforestation, and the 2019-2020 bushfires in recent years, have resulted in large-scale habitat loss, and have likely contributed to the high number of flying foxes in Parkes.

“Their increased abundance in Parkes is likely because we experienced such a mild summer and winter in 2020, and recent rain has caused local eucalyptus species to flower profusely,” said Michael.

Council reassured residents that the spread of viruses from flying foxes to humans was extremely rare. There is virtually no risk of infection unless physical contact is made with a flying fox.

However, to minimise any potential risks, Council recommends residents keep their distance as much as possible and avoid interacting with the flying foxes in any way.

If a resident encounters a sick or injured animal, they should avoid handling, and contact a licensed wildlife rescue and rehabilitation provider such as WIRES.

Michael said during the past 30 years populations of flying foxes had seen a dramatic decline in numbers across Australia. “Flying foxes perform important ecosystem services as they feed by pollinating native vegetation and spreading seeds across large distances. Their role in our environment is vital to the ongoing health and regeneration of our native woodlands and forests. Many of our native plants and animals rely on their pollination and seed dispersal efforts for survival.”

Parkes Shire Council said they would continue to liaise with the affected residents and State agencies about the increased presence of flying foxes in the Parkes area.