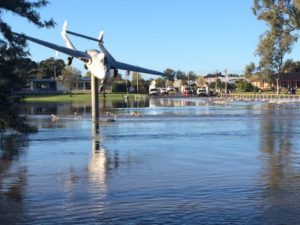 Forbes not only experienced a deluge of floodwater over the past week, but also an influx of politicians to see the flood affected areas. The outcome of these was the announcement of disaster assistance to affected communities in Forbes and other towns in NSW. Another important message is that Forbes is open for business. “Forbes is up and running,” said Chris Roylance, President of the Forbes Business Chamber. The Parkes Phoenix want to encourage residents and visitors to support Forbes and live local, love local and support local.

While floodwaters were slowly starting to recede by Wednesday, Mayor Phyllis Miller said: “We now wait with anticipation what the next lot of water does in the catchment. We are well prepared with all our services remaining operational. Please call the SES on 132 500 if you need help.” She said residents would hopefully be able to return to their homes by the weekend. Evacuation orders have affected more than 230 residential properties and some businesses. By mid week 97 requests had come in for rescues and more than 2,300 requests for assistance.

“Emergency services and volunteers have been doing an incredible job,” said NSW Premier Mike Baird when he visited Forbes on Monday. While farmers have experienced extensive crop losses, Rob Whelan, CEO of the Insurance Council of Australia, said it would take several weeks for the full extent of the losses to be known, but it could be in the tens of millions of dollars.