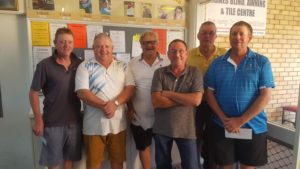 Last Saturday’s Irish team stableford event, sponsored by Paul Thomas and Ken Ryan, was a big hit with 63 players in action. Victor Gaidzionis, Brett Cowling, Rod Kiley and Luke Greenwood made the most of the unique scoring method to claim the win with 100 points. They combined brilliantly, and importantly on the right holes, to win by eight points.

Playing as a team of four, all golfers played out each hole as they would in an individual stableford, but that was where the standard scoring finished. On the first six holes, only the best stableford score of the four players was recorded.

Next best in the competition were Peter Magill, Rob Cheney, Bernard Provan and David Stevenson with 92 points. They were followed by John Green, Mark Kelly, Brian McPhee and Jarrod Kemp on 90. Rod Luyt, John Pearce, Bill Warren and Tom Delmenico finished in fourth position with 86 points.