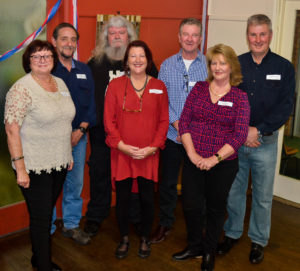 Despite lengthy road detours due to floodwater, more than 90 former Parkes High School students and their partners made the trek back to Parkes last weekend for the 2016 Parkes High School reunion. The former students had attended Parkes High between 1973 and 1978, which is a stretch of some 40 years – give or take a few.

The ex-students came from far and wide to attend the weekend-long event. Some had travelled from as far as Amsterdam, Brisbane, the Gold Coast, Sydney and Canberra to catch up with the many locals who gathered to renew old friendships and reminisce about their school days. The weekend event kicked off with social drinks last Friday night at the Royal Hotel.

The main function was held last Saturday night at the Parkes Sportsman’s Club, where the guests were treated to a trip down memory lane. The room was adorned with memorabilia – including class photos, extracts from the Currajong School Magazines, and school uniforms. A memorial paying tribute to passed students was also on display.

The evening commenced with a roll-call of the 1973 Year 7 class groups. Local Rodney Barnes, a 1978 Prefect, wearing his old school jumper and badge performed the Master of Ceremonies duties. Parkes Town Crier, Mr Tim Keith performed the Welcome to Parkes. Speeches were made by School Captains Debbie Miles (nee Gosper) and
Stephen Reilly. Special fun presentations were also made to the ex students in attendance.

The weekend’s festivities concluded with a family brunch on Sunday morning which was relocated to the Royal Hotel’s beer garden due to weather conditions. The weekend was deemed a great success by all that attended. Many are looking forward to the next reunion, planned for another 5 years time.