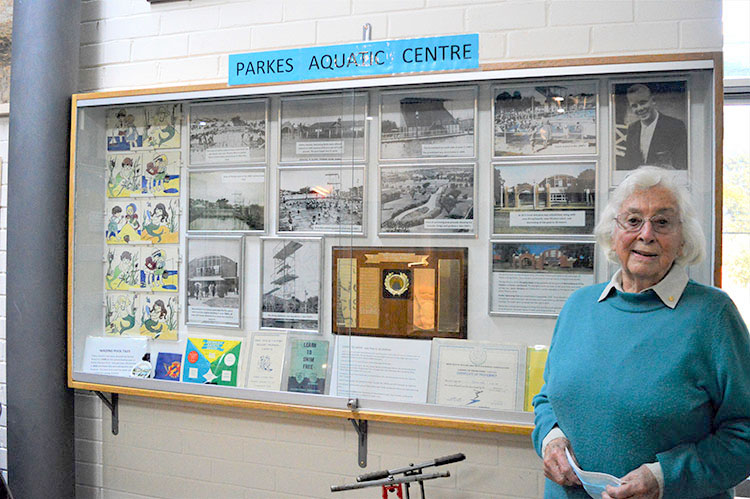 LEARN TO SWIM… Dorothea Tom was one of the instructors of the very successful Learn to Swim program that ran for five decades and taught more than 15,000 children to swim. “It was a lovely time,” said Dorothea of her 18-year involvement. Dorothea is standing at the new Parkes Aquatic Centre exhibition at the Henry Parkes Museum.

Have you ever wanted to swim in a pot of gold? That is literally what you are doing at the Parkes pool every summer as it was built over the Phoenix gold mine, which was the richest mining area in our town’s ‘golden’ history.

Before the pool was officially opened on 16th January 1935, the local swimming hole was at Doyles Crossing near the Eugowra Road crossing on Goobang Creek. The problem was that every time the creek flooded, the pool washed away. When this happened the Parkes Council and Goobang Shire had a fight over whose responsibility it was to repair it.

A referendum was eventually held in January 1934, on the hottest day on record, and 80% of the population voted for a pool in town. Construction on the 55-yard long pool in 1934 was a monumental job as it was done by pick and shovel.

If you want to know more about one of the most important features in our town, there is a new display at the Henry Parkes Museum highlighting its interesting history and development over the years. With lots of historic photos and interesting facts, including a feature on Olympian swimmer Rex Aubrey, it is worth a visit during these COVID times when we have to rediscover our own backyard.

“Locals are welcome to come and have a look,” said President of the Parkes and District Historical Society Bruce Hall. “You can use your NSW Discover vouchers before they run out at the end of the month.”