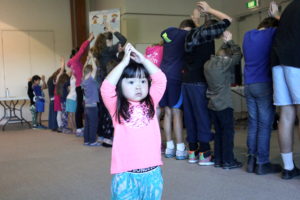 Dozens of kids brought their parents to the Parkes Library on Tuesday to enjoy the Andy Jones Show.

The raucous show provided plenty of laughs as Andy shared his unique blend of jokes, music and more jokes. Participants were treated to an impromptu comedy master-class as Andy explained some of the tools of the trade before inviting the audience to join the show.

The 45 people – of all ages – enjoyed the interactive performance, with some finding themselves in the spotlight with physical comedy, others trying their hand at a bit of stand-up and everyone getting up to dance.

Andy Jones is a best-selling children’s author, musician, song writer and come- dian. He has released five CDs, written 12 books, and performed thousands of shows around the country. His titles include The Ripper Razzle Dazzle Big Book of Fun, Hot Jokes for Cool Kids and The Burptionary.