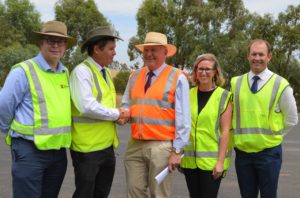 Newell Highway upgrades and major work on Five Chain Lane northwest of Parkes were announced in Parkes by Minister for Roads, Maritime and Freight on Wednesday. Minister Melinda Pavey, said over the next four years 30 new 1.5 km lanes would be added to the Newell Highway with work commencing in six weeks’ time.

The RMS boasts a new works approach in which as much bitumen as possible will be delivered in the shortest time, and the employment of local contractors will be considered a key component to the works. This upgrade will reduce the Newell journey by 25 minutes.

Parkes Mayor Ken Keith voiced his appreciation of the State Government support, acknowledging that the Newell is the third busiest state highway. “But this is the one that is really important to regional people,” he said.

“We are also planning a better future for the Great Western Highway with the longterm vision of a dual carriageway for the Bells Line,” said the Minister, “and we intend getting as much freight on rail as possible.”